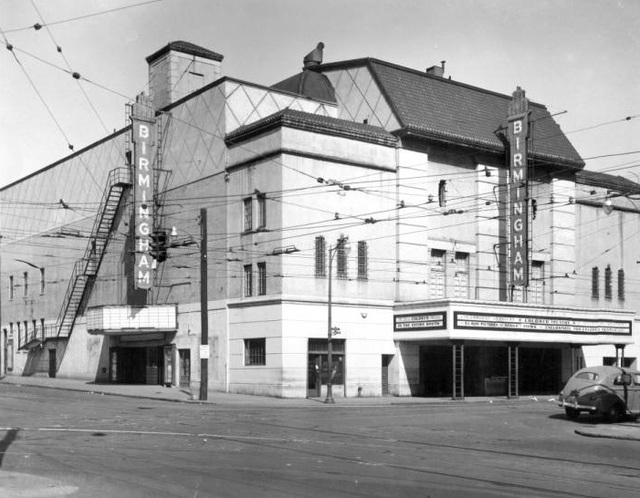 The theater that closed and was demolished in 1950 as the Birmingham Theater had a rich and varied history both as a cinema and as a vaudeville house dating back to the building’s opening around 1890 as the Birmingham Auditorium, a general civic facility located on 3rd Avenue N. between 17th Street N and 18th Street N, about a block way from where the still-surviving Alabama Theatre was later built. In 1898, it became the Bijou Theatre and became a venue for prominent touring vaudeville companies and major performers of that era, including George M. Cohan.

In 1915, the theatre closed for two years, reopening as the Birmingham outpost of the Loew’s vaudeville circuit, and now known as Loew’s Bijou Theatre, with a large electric sign on the roof proclaiming Loew’s Vaudeville. In that era, Loew’s even brought circus and animal acts to the theatre as well as film.

In 1927, Loew’s moved its operations over to a nearby former Masonic Hall that had been converted to a theatre, proclaiming it now Loew’s Temple Theatre. The Bijou Theatre then became the Birmingham home for the Pantages circuit; that company gutted out the theatre and remodeled it, giving an entirely new facade. It reopened as Pantages Theatre on October 31, 1927 with Constance Talmadge in “Breakfast at Sunrise” and five acts of vaudeville on the stage. It was closed in 1930. On December 30, 1934 it reopened as the Pantage Theatre and was still operating under this name in 1941.

Paramount eventually assumed control of the theatre and operated through its subsidiary, Wilby-Kincey, until late-1946. It became an independent operation and was renamed Birmingham Theatre on December 25, 1946, reopening with William Gargan in “Rendezvous 46” plus Blue Barrow and His Band on stage. It served a predominantly African-American audience. It was razed in 1950; the site then became a parking lot.

A master list of buildings designed by Birmingham architect D. O. Whilldin, compiled by Thomas M. Shelby, lists the Pantages Theatre as one of his projects from 1927. However, as B. Marcus Priteca pretty much had a lock on theater designs for Pantages, it’s most likely that he designed the 1927 remodeling and that Whilldin acted as supervising architect.

The March 24, 1917 issue of The Moving Picture World had this item about plans for the extensive remodeling of the Bijou for Loew’s:

“To Remodel Bijou for Loew Chain.

“Birmingham, Ala.– — E. A. Schiller, of the Schiller amusement company, and Marcus Loew, of the Loew vaudeville circuit, will in the near future let contracts to remodel the Bijou theater, which will include the changing of the theater front, a new addition, remodeled lobby, additional fire escapes, rest rooms on each floor for ladies, lounging and reading rooms, etc. The house will be redecorated throughout, a new ventilating system and additional seats installed, and additional stage equipment provided, with a screen of modern design for moving pictures. ” 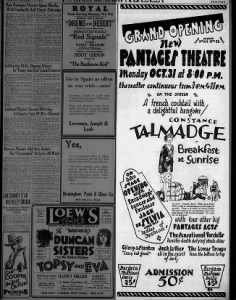 This closed as Pantages in 1930 and reopened as Pantage on December 30th, 1934. Grand opening ad posted.

Reopened as the Birmingham theatre on Christmas Day, 1946. Ad posted.