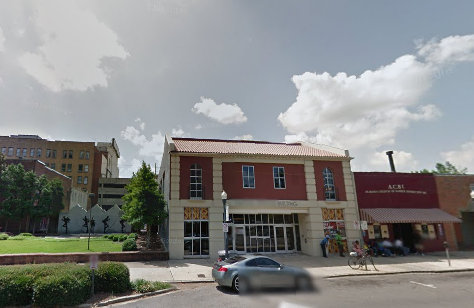 The Champion Theater was opened prior to 1921. It was listed in editions of Film Daily Yearbook from at least 1941 through to 1950 and beyond.

The Champion Theatre was listed in the 1921-22 edition of the Julius Cahn-Gus Hill Theatrical Guide. The owner or manager was P. A. Engler, also listed as owner or manager of the Frolic Theatre. The only address given was 1774 Fourth Avenue, apparently the location of Mr. Engler’s office. CinemaTour lists the Frolic Theatre at 1720 Fourth Avenue. Though the Cahn guide lists both houses as picture theaters, the Frolic frequently presented live music shows.

The Champion Theatre has been demolished. It was two doors down from the Famous Theatre, which is still standing.

The Champion Theatre can be partly seen in this 1940s photo of the Famous Theatre. The Champion’s marquee is at the far left, though the name of the house isn’t visible.

Bhamwiki’s page for the Champion Theatre says that the house first opened in 1914 at 306 18th Street North, but in the early 1920s it moved to 312 18th Street North, which had earlier been the first location of the Frolic Theatre. The Frolic had moved around the corner onto 4th Avenue North. In later years, the wiki says, the Champion was listed at 1720 4th Avenue North, which was also the second Frolic’s address.

Bhamwiki’s Frolic Theatre page says that the address was shared as early as 1922, and that at that time both houses were under the same management. The Frolic’s address 1720 4th was probably used as the office for both houses, but it’s possible that the Champion was then still at 312 18th Street.

The year the Champion moved from 18th Street to 4th Avenue is uncertain, but the Birmingham Public Library has this photo dated 1939 showing the house in what must have been its final location. The building looks fairly old at that time and might have been an existing building into which the theater moved when it left 312 8th, but not so old that it couldn’t have been built as a theater sometime in the 1920s.

The 1948 FDY lists both the Champion and the Frolic among the five Birmingham theaters then being operated by the Jefferson Amusement Company (along with the Carver, the Famous, and the Eighth Avenue.)