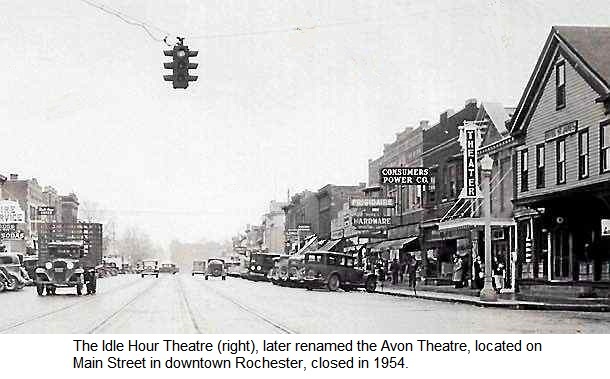 This house opened in February, 1914, as the Idle Hour Theatre. Originally seating 400, it was remodeled and expanded to 500 seats in 1936, with an Art Deco facade designed by Dearborn architects Bennett & Straight. At this time it was renamed the Avon Theatre.

The Avon Theatre was Rochester’s only movie house until the opening of the Hills Theatre across the street in 1942. After that the Avon Theatre operated as the town’s “B” house until closing in the early-1950’s. As the building was being remodeled to accommodate a retail store in 1955, the Art Deco front collapsed. The rest of the building survived and is still standing, used as retail space, but it is no longer recognizable as a former theater.

Click on the “Slideshow” link on this web page to see one modern and one vintage photo of the Avon Theatre building.