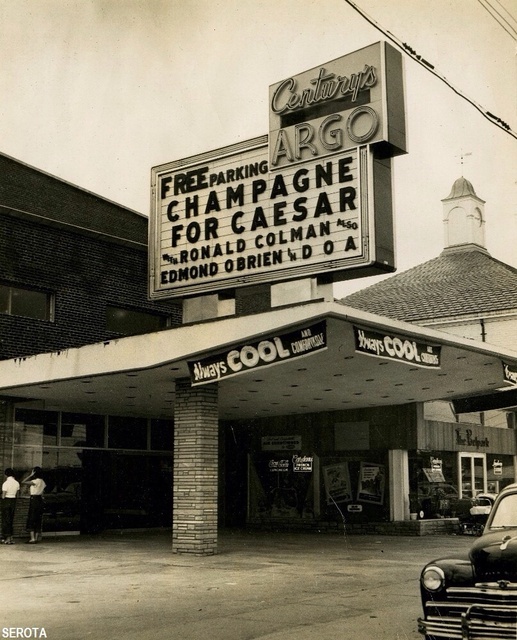 The Argo Theater opened in 1950. This one-time Century Theater stands on Hempstead Turnpike in the Elmont section of Nassau County. From the outside, the Argo Theater appears to have a balcony.

After Century Theaters gave up on it, the theater was an independent for a brief time. After closing in 1985, the building has served as a club, a store and now appears closed. It stands less than a mile from Belmont Racetrack.

It had a hugh projection room with a shower in the bathroon and large windows overlooking the turnpike. Of course working for Century in the day was the ultimate job for a projectionist.

Hey nhpbob… I know first hand that memory can play tricks, and it I think it has done just that in the case of your “Go Ape” recollection. “Battle for the Planet of the Apes” was released in the early summer of 1973 and probably did OK at the box office, given its relatively meager production costs. Fox issued the “Go Ape” marathon the next summer in 1974, probably to drum up interest for its upcoming “Planet of the Apes” network television series – and milk a few extra pennies out of the franchise at the same time.

The architect of the Century’s Argo Theatre was Samuel Lewis Malkind, who also designed the Parsons Theatre in Flushing, New York. Early in his career, Malkind worked as a draftsman in Thomas Lamb’s office.

Malkind might have designed other theaters on his own as well, but so far the Argo and the Parsons are the only ones I’ve been able to track down.

The Community and Bellerose used to share prints when they had the same films. Presumably the Argo shared with the Park.

The balcony is probably still intact above the store in the auditorium.

How long did the Mittman family own the Argo Theatre? Anyone know what became of them?

Additional after its day photo added.

1966 marquee photo added courtesy of Denise Stojda. Via the Long Island and NYC Places that are no more Facebook page.

listings for this theatre ended in the NY Daily News in 1985.