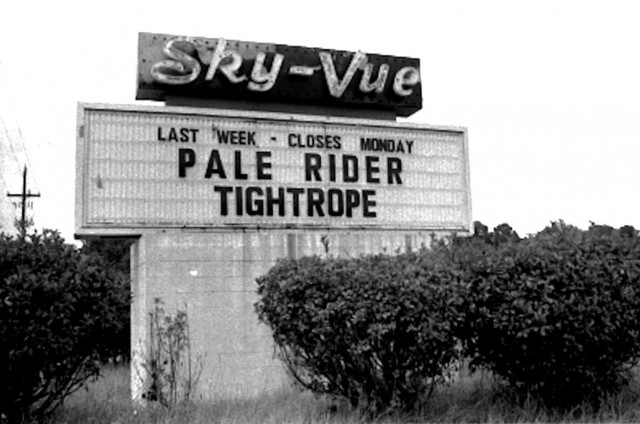 The Sky-Vue Drive-In opened on December 11, 1953 with George Montgomery in “Fort Ti”. It was located at 1021 Broad Street, with a 250 car capacity. It was operated by James N. Wallace. During the 1960’s, Broad Street was getting redeveloped into retail and shopping centers. So in 1972, the Sky-Vue Drive-In closed and the property was sold for redevelopment. A. E. Nienow requested in July of 1972 from the Sumter County Commission to rezone 14 acres of land on North Frontage Pike, from residential to commercial. The commission granted approval of this measure. He was going to sell the land to Wallace for the purpose relocating the Sky-Vue Drive-In Theatre.

Martin Theatres (Fuqua Industries) who was operating the other Sumter Theaters at that time, took over the operation of the new Sky-Vue Drive-In. Martin reopened it on October 18, 1973, featuring “The Hong Kong Cat” and “Dr. Phibes Rises Again”. The new Sky-Vue Drive-In theatre location had a parking ramp that could hold 400 cars and featured a new modern refreshment stand. The theatre closed in August 1985. This theatre was last drive-In theatre open in Sumter, SC. The property is still vacant and undeveloped.

On a side note, on March 17, 1969, Piedmont Theatres from Charlotte, NC and James Wallace got permission to build two new drive-in theatres in Sumter. However, they never were built.

This drive-in closed just before the Martin chain was rebranded Carmike Cinemas (which bought Martin in 1982).

The Sumter Sky-Vue claosed in 1985.Clint Eastwood in Pale Rider Clint Eastwood also in Tightrope 1984. The last movies at the Sky-Vue Drive-In at 801 N. Pike West.

The Sky-Vue Drive-In opened December 11, 1953 with George Montgomery in “Fort Ti” supported by widescreen shorts including a Three Stooges comedy and two cartoons. The Sky-Vue’s final owner, Carmike Theatres closed the theatre on September 2, 1985 with a Clint Eastwood double-feature of “Pale Rider” and “Tightrope.” 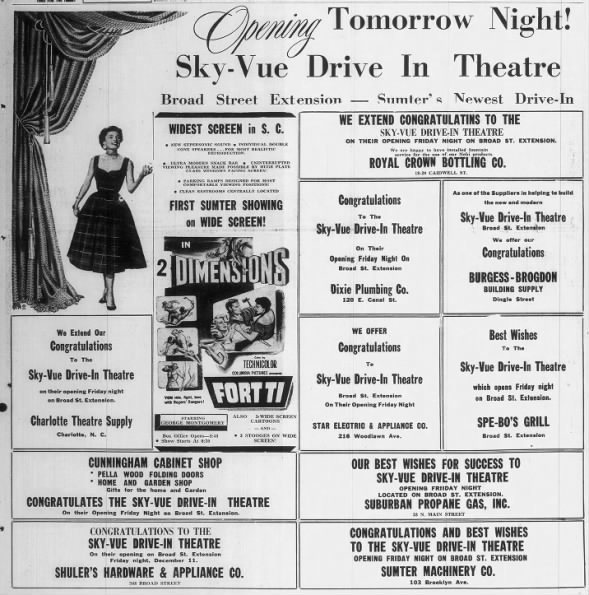