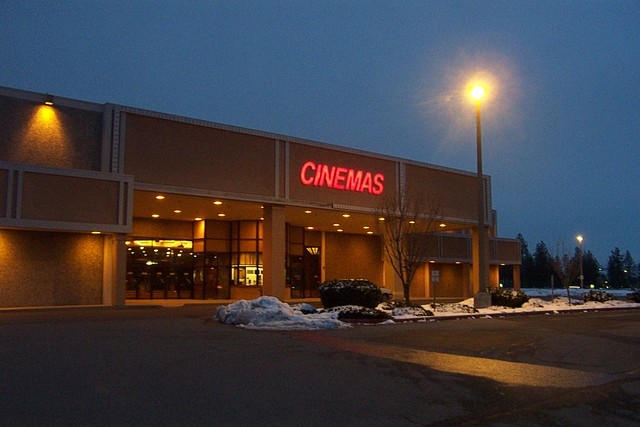 Luxury Theatres opened the 2,400-seat Newport Cinemas on July 10, 1985 on the site of the former Starlite Drive-In. The $2.4 million cinema, with all the latest amenities, was touted as the largest theater in Washington.

The outdated cinema closed on August 30, 2004. The reason given in the Spokesman-Review by Regal was that it gradually lost attendance after the opening of Regal’s NorthTown Mall 12 in 2000.

In December of 2010, the Spokesman Review published a report of buildings left empty because of the economic downturn. The building at 10404 N. Newport Highway was one of them. In 2012 The Home Boys, a seller of manufactured homes, was using the parking lot.

This theater was built by Tom Moyer of TMT Management, Portland, OR and was one of his Luxury Theater locations. This one was the first theaters he built that was Dolby Stereo in every house. He usually put stereo in one or two large theaters and mono in the smaller ones. At some other locations, he installed Dolby processors in the large ones and other brands of stereo processors (not Dolby), instead of mono sound, in the smaller ones. There were other modern theaters in north Spokane when the Newport Cinemas opened. But, it had superior sound and picture. It was a first run theater so that was a draw also. From conversations with locals, when it opened it had the best presentation in Spokane. But the presentation suffered after a few years and attendance dropped. I am not familiar with Act III Theaters or Regal Cinemas operations, so I do not know if change of ownership caused this decline. It is sad to me that such a nice theater was abandoned after 19 short years. It was not an architectural stand out so that may have something to do with it’s closure, i.e. not worth upgrading. I will say that I don’t even know if they even upgraded to digital sound in the early nineties. Maybe of interest to some: the eight projectors in this theater were transferred from the North Division 6 and the East Sprague 6 theaters. Up to this point, those theaters were running large reels that required two projectors for a continuous show. Platters were installed in all 6 houses and four of the six “slave” projectors were moved to the Newport location. The two larger theaters at each location had both “master” and “slave” projectors and so a back-up projector was always available. Both the North Division and East Sprague theaters were two of those theaters that had stereo sound in the two larger theaters and mono in the smaller one, at least until 1988.