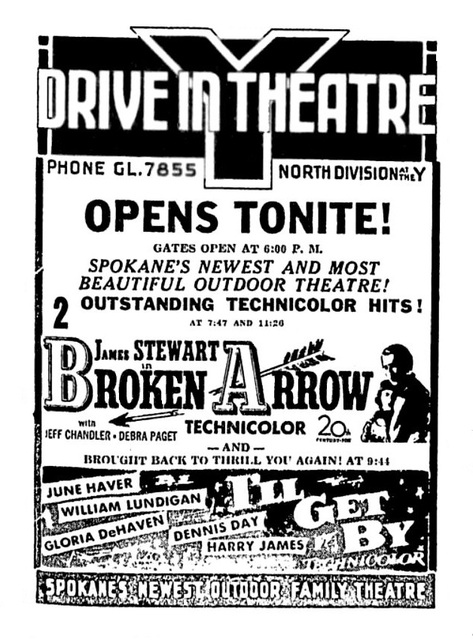 When the Y Drive-In opened on May 14, 1952, with James Stewart in “Broken Arrow", it was billed as “Spokane’s newest outdoor family theatre". Morrie Nimmer, manager of the local Orpheum Theatre, was the developer of the 500-car theater, which would become Spokane’s fourth drive-in. It was described as being “near the North Division ‘Y’ junction in the Whitworth area.

In December of 1975 the Y Drive-In came under fire when it was charged by local churches of “corrupting the moral fiber of the youth of Spokane". The Spokesman-Review said, “The woods and hills behind the drive-in are filled with cars containing young people sitting and watching the movie.” There were even reports of younger people riding their bicycles there to receive a gratis education in human nature by watching “Teenage Hitchhikers” or “Teenage Tramp". In December the drive-in had already closed down for the season but it reopened the next March with “The Story of O".

The city council said they would consider everything to see if there was a problem. One solution considered was to build a shield around the theater, which never came to fruition. The problem was partially resolved when Mr. Nimmer announced that the sloping hill behind the theatre would be leveled to prevent any voyeurism. Progress also caught up with the situation as apartments, with no windows, facing the screen, began to be built around the theater but there were a few areas where the screen could still be seen. Eventually the Y’s X-rated policy slowly faded away to R-rated and it began the 1979 season with a mainstream program.

The Y Drive-In was never associated with any large chain and evidently Mr. Nimmer, according to the Spokesman-Review, operated it for more than 30 years. The Y Drive-In dropped out of the newspaper listings in September of 1986 and appears not to have reopened in 1987.

There pictures of the Y Drive-in on its gallery page at Drive-ins.com.

I never got a chance to see a movie at the “Y” Drive-In, mainly because, by the late ‘70s, it was showing the kind of stuff no parent would ever take a kid to. But I certainly remember poring over the listings in the paper — movies like “The Naughty Stewardesses,” “The Swinging Stewardesses” — boy, I couldn’t wait until I was old enough to see a movie at the “Y.” Alas, I never did.

Also opened with “I’ll get by”. Closed in 1986. Demolished(date unknown?). Site is now 3 car dealerships(Wendie Ford, Nissian and Infiniti). Why the name y?

The answer to your question is in the first paragraph of the description.