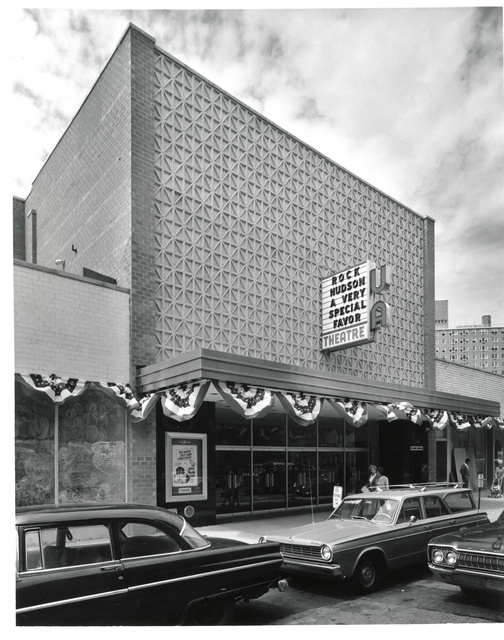 Skouras Theatres opened the UA Theatre on August 24, 1965 with Rock Hudson in “A Very Special Favor”. It was named as part of the Lefrak City apartment complex. It stood on the north side of the Long Island Expressway. It was equipped with Dimension-150 projection equipment, located in the projection booth which was located at the rear of the orchestra seating, beneath the balcony. After years of running it, UA closed the theatre.

The movie house temporarily reopened as an Indian cinema screening Bollywood movies, but soon closed again. Finally Loews took over the lease and triplexed it on December 16, 1983. Soon it was running action, horror and comedy.

It was closed on June 18, 1987 and was gutted and converted to retail space. The frame of the marquee over the entrance, as well as the flat marquee that faced the Long Island Expressway are both still there, but have been covered by signs.

I found and uploaded the grand opening ad for the UA theatre on August 24th, 1965. It claimed to be “The World’s "All Purpose” Theatre".

The World’s First All Purpose Motion Picture Theatre? Hmm… not sure what they meant by that. How about Radio City Music Hall? How about most other movie palaces with stages? Peculiar claim. Anyway, that claim was about as accurate as the artist’s rendering in that ad, which bears absolutely no resemblance to reality!

Interesting! But who, among the general public, would have understood that claim?

More appropriate for a bag of flour.

I suppose they could have shown films made at Gold Medal Studios in the Bronx… ;)

I’ve uploaded several photos and articles to clarify information about the theatre.

The lobby was located on 99th St, although there was a vehicle parking entrance on 57th Ave that led to a parking deck over the retail stores on 99th St. Movie theatre patrons could walk to a stair that led directly down to the theatre lobby.

The name needs to be corrected as this was only briefly a Loew’s. It was more properly known as the UA Theatre LeFrak City, part of the Skouras chain.

The “All Purpose” claim had to do with the D-150 All Purpose projection system and curved screen for 70/35mm prints.

After its 1980s resurrection as a chopped-up Loews, the theatre closed for good and the auditorium was leveled off and converted to retail. For at least two decades it was a mattress store. In 2014-2016 it was gutted and combined with the adjacent former Loehmann’s space to become a new 25,000 SF Great Wall asian supermarket. The entry canopy was preserved and reclad, and the delicate terra cotta facade restored.

As I understand it the premise of Cinema Treasures is that the main listing be under the last name of the theatre, in which case it would be Loew’s. All other IDs would be under prior names. However, we all know that isn’t always the case which can cause duplicates.

Now this is a gorgeous 70MM screen. If one only existed still in the NYC area and it would have revivals of those films like they do on the west coast and in Europe.

Please update, became a Triplex on December 16, 1983 and closed on June 18, 1987 and the official name was Loews lefrak City Triplex