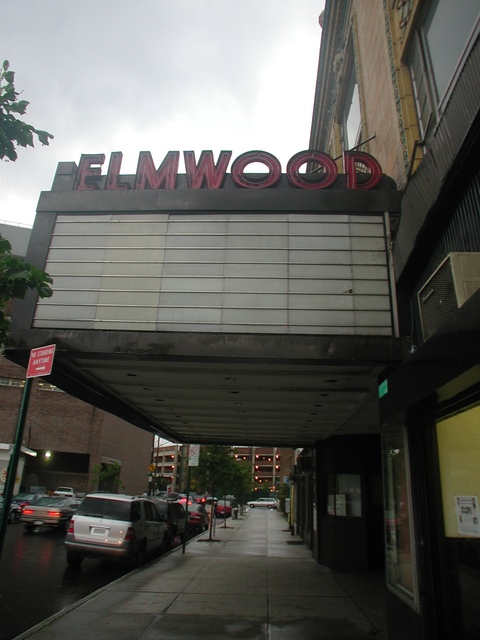 The Queensboro Theatre was built in 1928 and opened on September 17, 1928 with Margarita Fischer in “Uncle Tom’s Cabin” on the screen and Paul Specht and His Orchestra plus 5-acts of vaudeville on the stage. It was the first ‘Atmospheric’ style theatre to be built in Queens. It was equipped with a Link 3-unit organ. In 1946 it was taken over by the Interboro Circuit Inc. and renamed Elmwood Theatre. This once proud vaudeville and movie house along Queens Boulevard in the Elmhurst section of Queens closed on February 28, 2002. It is now home to the Rock Church in the shadows of the Queens Mall and the Long Island Expressway.

A plan to demolish the theatre after the creation of an 18-screen megaplex nearby stalled. Meanwhile, the Elmwood Theatre has recently been reconverted into a single auditorium space after years as a four-screen theatre. Restoration and renovation of other areas of the theatre were completed in 2012.

The New York Transit Museum has a photo from 1930 that features the Queensboro Theater’s sign in the upper right.

The $400,000 John W. Schladitz architected Queensboro was a very modest $400,000 theatre seating 2,012 at opening – 1,365 downstairs, 56 in the loge with the rest in the balcony. Schlalditz was said to have been trying to recreate a Spanish medieval castle with Italian influences popular in atmospheric theaters of the day. But murals throughout were Spanish landscapes and of the area. Silver ceiling had twinkling star effect. The Link 3-unit organ was installed for maximum versatility and demonstrated at opening in 1928. Scenic Studio and Novelty Scenic Studio both did great jobs in getting the stage and the rest of the house’s furnishing staged appropriately for impact at opening.

As a youngster in the 50s I remember seeing the Duncan Yo Yo man coming to the Elmwood for a Saturday matinee every summer. The Folks would take us to the movies on hot summer evenings just for the Air Conditioning. Saw Davey Crocket, 20000 Leagues Under the Sea and Bambi there to name a few. As a teenager there was The Hustler, Compulsion and many more. And don’t forget the chic-flicks like April Love and West Side Story so we could hang with the girls. I remember getting to the theater too late for admittance (5PM?) with a buddy after we finished our LI Star Journal paper routes. We were only 12, so we had to get an adult to take us in. The movie was Curse Of Frankenstein. In later years I worked across the Blvd. at both the little Gulf station on the triangle and at the Food Parade Supermarket.

When I was a kid this theatre frequently showed Hammer double bills. We got to know Christopher Lee and Peter Cushing here.

Re-opened as the Elmwood by the Interboro circuit in 1946, the theatre had a late-run policy until March, 1949, when bookings became day-and-date with the third tier of Loew’s in Queens (Woodside, Prospect, Plaza, Hillside, Willard). The Elmwood was still late-run in the 1948 ad displayed here

This theater closed as a quad.

The Elmwood Theatre Has 4 Screens, Not A Single One.

Like the original Queensboro, the Elmwood had one auditorium until “twinned” top and bottom. Subsequently, two additional screens were added to the ground floor, on the side adjacent to a parking area that has been since redeveloped with apartment buildings.

when quad, both balcony and orchestra split Nothing was added property