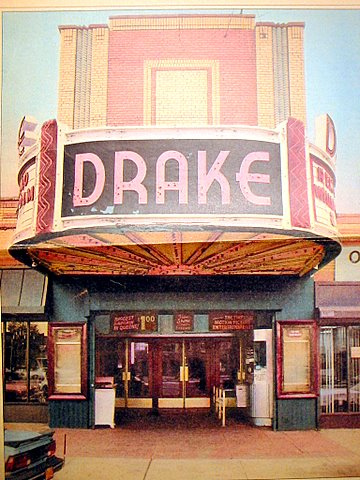 It was demolished in October 2016.

The former Drake building will be demo;ished to build condos. http://www.qchron.com/editions/central/demolition-on-the-menu-for-abbracciamento-s/article_1e8fbe82-727b-5248-a79a-c92bd9607b9b.html

Ironic, and sad back to back comments – one with the text of an article announcing the construction of the Drake, the other a link to an article about it’s demolition.

And so it goes…

I was in a livery cab this afternoon that drove past the now-closed Abbracciamento Restaurant, and I thought it looked like an old movie theater. It hasn’t been demolished yet, but everything was boarded up.

The property changed hands; demolition permit still in effect but nothing has happened. From an article in Queens Chronicle, Sept. 1, 2016, by Christopher Barca:

But while one block begins to blossom, the one that houses the former Abbracciamento’s Restaurant a short walk up Woodhaven Boulevard still sits dormant. Shortly after eatery owner John Abbracciamento closed the restaurant and sold the building — which included a handful of small businesses — for $9 million more than two years ago, plans to demolish the block and build a new apartment building in its place were filed. However, the site was sold again for $10.85 million in February 2015, just a few months before a permit allowing for the teardown was approved by the city. The only noticeable action taken since has been the removal of the building’s marquee, which remained after the site’s conversion from a movie theater into a restaurant. Graffiti has continued to accumulate on the sides of the structure and on the permanently closed window gates. However, city records show the demolition permit was issued to the owner, 62-98 Realty LLC, on Aug. 23. A Department of Buildings spokesman said it isn’t unusual for such a long time to elapse between permit approval and demolition beginning. “Most permits last about a year once they are pulled,” the spokesperson said. “Some developers wait until they are ready to do the work before they actually pull the permit.”

The Drake has been demolished. pic here: https://4.bp.blogspot.com/-RkwJz1iYW1o/WAW5Mz8KdBI/AAAAAAABAL0/O6QgjB4t9foiHVWTzehLX1qOnvmpvvKFQCLcB/s1600/carmen2.jpg

Joe Abbracciamentos restaurant occupied a space next to the Drake theater for many years…I thing he took over the theater to expand into a catering center of sorts….apparently it didn’t pan out…