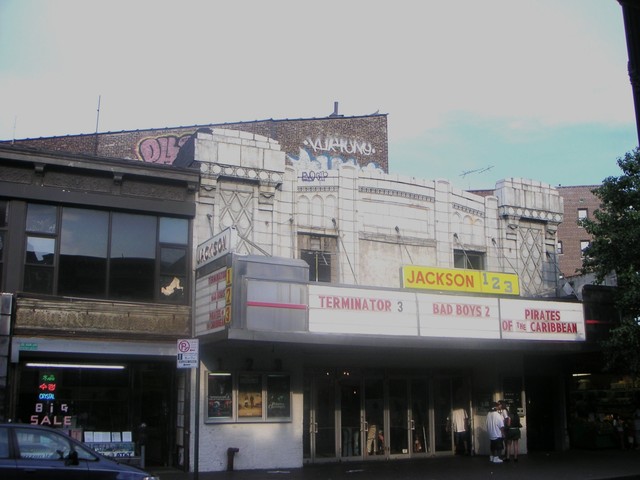 Located in the Jackson Heights section of Queens. The Jackson Theatre opened December 26, 1924 as a single screen movie theatre with a total seating capacity of 1,500. The theatre was equipped with a Wurlitzer 2 manual, 7 rank theatre organ. It was built and operated by the small Grob & Knobel chain, who sold it to William Fox in 1928. He lost it in bankruptcy in 1930 and the Jackson Theatre, together with the Boulevard Theatre were taken over by Skouras Theaters Corp. chain.

The stadium style raised seating area at the rear was later halved to allow for two small theatres, each seating 228. However, the main floor auditorium, with 601 seats, its original stylings intact, and Dolby digital stereo, was arguably the best “Cinema Treasure” theatre still operating in Queens until it closed on October 20, 2009. The operators were evicted by the Sheriff for non-payment (presumably of rent). The Jackson Heights Food & Film Festival, due to take place on October 24, was cancelled due to the closure.

In recent years as a triplex, re-named Jackson Triplex Cinema, it had been showing first run Hollywood releases with Spanish subtitles to cater for the area’s large Latin American population. It was closed in October 2009 and a ‘For Rent’ sign was the only message on the marquee.

Sun Equity Partners and the Heskel Group have purchased the property including the Jackson Theatre for $27 million and re-development still in the planning stages. No permits for demolition have yet been filed. Details here: http://www.qchron.com/editions/western/mixed-use-building-coming-to-nd-st/article_113a1749-6048-5f9b-b65e-68707daa5598.html?mode=story

Articles in 1925 issues of Exhibitor’s Trade Review and Architectural Forum cite Charles A. Sandblom as architect of the Jackson Theatre.

Went there yesterday hoping to salvage something, anything.

The Jackson Heights Theatre is gone…

rest in peace, another part of my childhood gone.

I will never forget seeing 2001 as an eight year old in 1976, and then walking outside and going to the paperback store on Baxter and buying The Making of Kubrick’s 2001. That changed my life. To the projectionists: thanks for making this gateway such a magical experience.

A current view of the ground site, along with news coverage of the controversy raging over what Target can build there, is available here

In 1925, it was oriented toward the new neighborhood, Jackson Heights, but it was clearly in Elmhurst, no?

In 1978 I saw “The Wild Geese” there (Richard Burton, Roger Moore, Richard Harris). It was still an undivided theater. Smoking was restricted to the balcony.

SlimFocus, wasn’t the bookstore (which I barely remember) on Ithaca and Baxter (where a Chipotle’s now stands)?