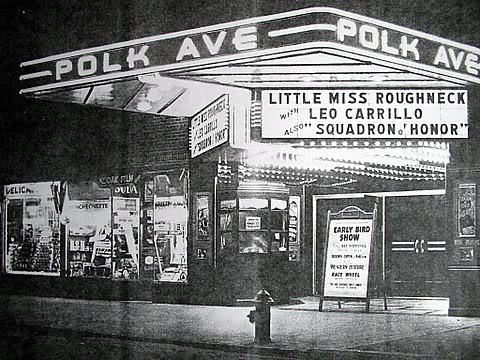 I don’t know anything about this theater’s history, but it was located on the north side of 37th Avenue just west of Junction Boulevard on the Corona/Jackson Heights border in Queens. By 1941 the Polk Avenue Theatre was operated by the Island Theater Circuit.

It operated until its closure as an adult theater and had been so for as long as I can remember (more than 25 years), but I presume it was once a small neighborhood house that looks to date from the 1930’s or 1940’s. The name of the theater was displayed in large red-neon block letters on either side of the marquee.

Not only does the status need to be changed to Demolished, the description should be amended. While the name was displayed in “large red-neon block letters” in more recent decades, historical photos posted previously show the original marquee, later hidden beneath that shiny metal covering, had gloriously sleek art deco neon lettering stretched across its entire length.

I’m not sure what you’re saying about the neon letters on top. Way back in the early 50’s, I recall the Marquee showing the theatre name as POLK AVENUE, however, the neon letters saying POLK have been there since at least 1964 that I recall.

Yes, I’m referring to that original POLK AVE marquee. The first picture on the photo page shows it (apparently in 1938, since Little Miss Roughneck was released in January 1938 and Squadron of Honor in June 1938) and that lettering looks absolutely gorgeous. The more modern block neon was okay, but nowhere near as evocative as what I suspect was hidden under the metal sheathing. Wish I’d been able to find out if it was, indeed, under there when they tore it all down.

Jeffrey1955- Yes, the Polk Ave was underneath, however, they removed the neon tubing. All the small light bulb sockets were also underneath. I remember when the sequencer broke and the last owner was too cheap to fix it, so he used “random flasher buttons” until he had the underside covered also.

Michael Kaplan-I’ve worked as a projectionist at ALL the theatres you’ve mentioned. I used to eat at the Dragon Seed all the time. You didn’t mention the Jackson and Colony theatres on 82nd ST. I was at the Jackson after it was renovated by Skouras in 1965. It was the nicest single in the area….until it was turned into a triplex.

Techman, I watched many movies at the Jackson and Colony as well as the three mentioned. If I recall, I saw both Kiss Me, Kate, and Dial M for Murder in 3D at the Jackson. The Colony screened more ‘art’ fare; I know I saw at least one Ingmar Bergman film there (in a mostly empty room). Used to eat lunch next door at the Woolworth’s.

michaelkaplan-I’m SURE that we must have crossed paths at some point.-lol When I worked at the Jackson I ate at the Colony Deli a few doors down from the Jackson. It was owned by a friend of my family. I don’t recognize Jackson Heights today.

Matthew Prigge – The owner is a friend of mine and I serviced the video projector a few times before it closed. Back in the 60’s I worked there on Wednesdays.

techman707 – I have a question for you on the Gusseins I would like to ask you offline. My email is