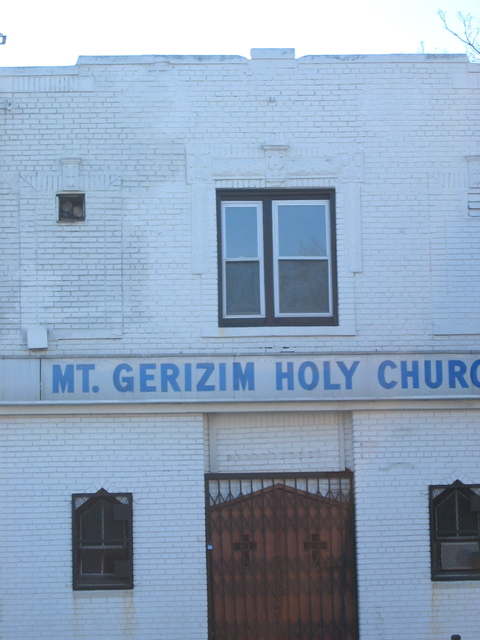 The Palace Theatre dates back to the early-1920’s and was the first theatre built in the North Corona area. As larger theatres were built closer to the Junction Boulevard-Roosevelt Avenue shopping district, the Palace Theatre was reduced in importance and became perhaps the only “Negro theatre” in North Queens. The double feature programs were always the same as those that originated on the Loew’s and RKO circuits, but at the very end of their runs. The Palace Theatre closed in the 1950’s and now serves as the Mt. Gerizim Holy Church.

Christina Marie beat me to it, but I took these photos of the former Palace just a day or two ago.

I wonder what the original facade and entrance looked like when it was still in theatrical operation. I assume it was always a brick facade and imagine that the original wide entryway below the marquee was bricked over at some point and replaced with the new doorway and small windows seen in the 1st and 2nd photo. It’s also obvious there was never a balcony.

Does anyone know if the building served any other purpose between closing and its current use by the church?

My church (Refuge Church of Christ Corona my dad was the Pastor)was located at the corner of 34th ave and 101st. For years from at least 1970 to about the early 1980’s it was closed. When the church took it over they painted over the facade with the white paint and added the pull down gate. Behind the theatre on 101st street there is a house located where a parking lot would be. The house must have had something to do the theatre because it sits on the property. There is like a secret driveway back there and if you didn’t know it was there you would pass right by it.
As a kid I always wanted to know what and who lived in the house. The theatre is very long but not wide. I know that the church only uses half of the building as a sanctury, because when you go in you can tell it as if half of the build is blocked off or replaced with a wall.
I am not sure if the church Mt Gerizim is still in operation because it always looks closed even on Sundays. I will have to check that.

I moved the photos I posted in February to this location as I reorganized my photobucket account. The old links no longer work.

Just drove past there on last Sunday and it was closed and the door chained. I guess the church has closed down!

I believe this was one of the Sheer Bros. Theaters (Dan and Sam Sheer) and was closed or sold in the early 1950’s with the death of Henry Sheer, son of Dan Sheer.

It was St. Vincent De Paul Thrift store in the 70’s and early 80’s and we purchased it from them and it became Mt. Gerizim Church.

Was this ever known as the Palace-Colonial? I came upon an ad in the September 1920 Paramount Week for a Palace-Colonial in Corona as a participant in a special exhibiting event. I’ve uploaded a photo.