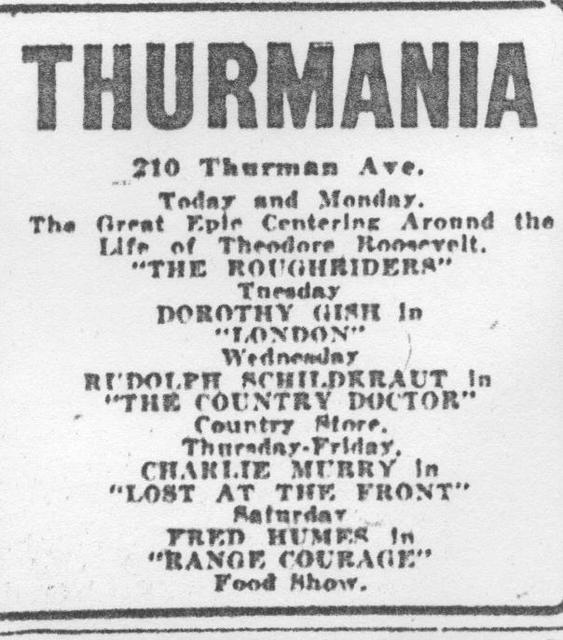 A neighborhood second-run theatre located in the German Village area of the southside of Columbus, Ohio. According to Phil Sheridan and Myron Seifert, both agree the Thurmania Theatre opened in 1915. The last Columbus Dispatch showtime listing was in 1944.

After closing as a movie theatre in 1944 after three decades in operation, the building later served as a pharmacy, then a doctor’s office, before housing an art gallery and gift shop for more than 20 years. That use ceased in 2008, and the building has been vacant since that time.

In the mid-1930s, the Thurmania Theatre was being operated by Clarence A. MacDonald, who also operated the Southland and Arlington Theatres. The September 9, 1936, issue of The Film Daily had an item about Mr. MacDonald’s rather peculiar new policy regarding newsreels:

“Columbus, O. — Holding that most political sequences are merely propaganda, Clarence MacDonald, owner of the Arlington, Southland and Thurmania theaters, has ordered all political scenes deleted from the newsreels shown in his houses. MacDonald follows the action of J. Real Neth, prominent local theater owner, who recently eliminated politics from his newsreels.”