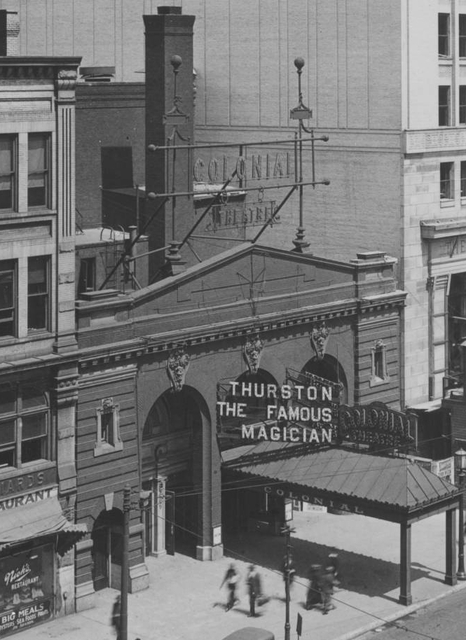 The address I found for the Colonial Theatre depicted in the photo above was 803 Superior Avenue. There’s a photo on page 100 of Rockefeller’s Cleveland, by Sharon E. Gregor (Google Books preview.) The caption says it was built in 1902 and opened in 1903 as a vaudeville house that later turned to legitimate theater.

The caption also says the Colonial was designed by the Detroit architectural firm of Mason, Reed, Hill & Painter, although the records of the American Terra Cotta and Ceramic Company just say Mason, Reed & Hill. Both apparently got the name wrong, as a history of Detroit architects says that the firm was Mason, Reed-Hill, & Painter, with George D. Mason, William Reed-Hill, and Walter S. Painter as principals.

Although have found the Colonial mentioned once in The Moving Picture World (the issue of January 3, 1914, when it was running the prestige picture “Traffic in Souls”) it spent most of its history as either a vaudeville or legitimate house. This history of the Colonial doesn’t mention movies at all, but says that the house mounted its last production in 1930, and was demolished in 1932.