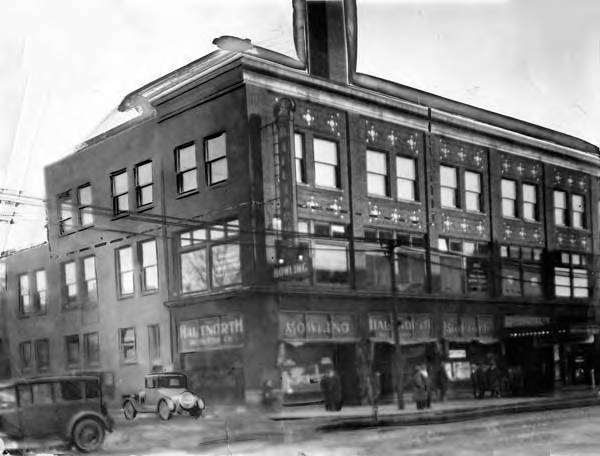 Located at E. 55th Street and Woodland Avenue. The Haltnorth Theatre was opened in 1914, and continued to operate until at least 1950.

A Cleveland Legacy: The Architecture of Walker and Weeks, by Eric Johannesen, says that the Haltnorth theater was designed by Walker & Weeks in 1914. Frank Ray Walker was the lead designer of the firm and Harry E. Weeks handled the business affairs. The Haltnorth Theatre project consisted of a three-story retail and office block fronting on 55th Street and the 1,280-seat auditorium extending along Haltnorth Court. The theater had a stage 30 feet deep. It was built on part of the site of Haltnorth’s Gardens, a long-established beer garden popular with the neighborhood’s large German population.

Historic references indicate that by the mid-1930s the Haltnorth Theatre was catering primarily to an African-American audience. Views at the Historic Aerials web site show that the building was still standing at least as late as 1970, but was gone by 2002.

Johannesen’s book notes three other theater projects that the firm of Walker & Weeks designed, but all of them remained unbuilt, so the Haltnorth was probably the only movie theater of their design that was completed. Three non-movie theaters the firm worked on were built: Goodyear Hall, Akron, completed in 1920; Cleveland Public Auditorium (Walker in collaboration with J. Harold McDowell), completed 1922, and Severance Hall, home of the Cleveland Orchestra, completed in 1931.

Also, I should note that Haltnorth’s Hall, which became the Coliseum Garden Theatre in 1905, was a different building than the Haltnorth Theatre. It was located down the block at the corner of 55th and Woodland, and had a Woodland Avenue address. It was demolished in 1909. As far as I’ve been able to discover, the Haltnorth Theatre never operated under any other name.

Joe Vogel or others…If you have found a photo of the Haltnorth Building and Theater I would be interested in seeing it.

I’ve just discovered that photos of the building are among the Jewish Heritage Exhibit Photographs at the library of the Western Reserve Historical Society.The online catalog listing is here: http://ead.ohiolink.edu/xtf-ead/view?docId=ead/OCLWHi2871.xml;chunk.id=c01_1D;brand=default

And it may be included in: “Merging Traditions: Jewish Life in Cleveland”, by Sidney Vincent and Judah Rubinstein.

I have been to Haltnorth Theater back in the 60’s. I lived down the street from the theater. I have pictures of it when it was Haltnorth Gardens& Hall.