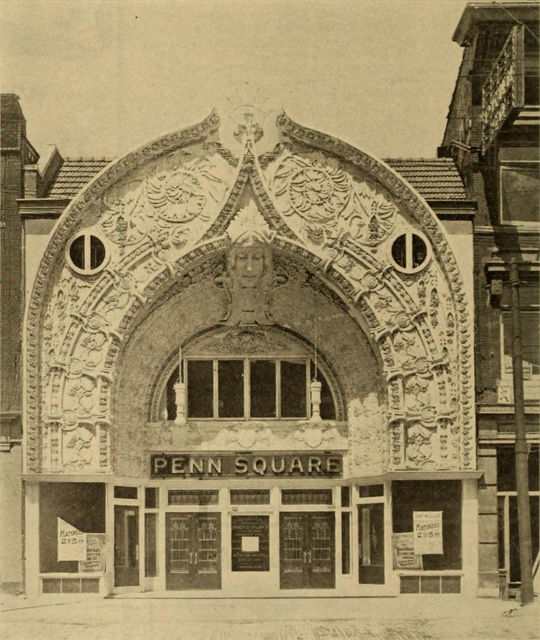 The Penn Square Theatre was located on the north side of Euclid Avenue, west of E. 55th Street. It was opened in 1911 and listed as (Closed) in the 1941 and 1943 editions of Film Daily Yearbook. Gone from listings by 1950.

An item about the growing popularity of terrazzo flooring in Cleveland appeared in the August, 1911, issue of The Ohio Architect, Engineer and Builder. It noted that the lobby of the new Penn Square Theatre had a terrazzo floor installed by the Venetian Art Mosaic Company of Cleveland.

The following text accompanied a photo of the Penn Square Theatre in the December 23, 1911, issue of The Moving Picture World:

“This handsome structure is the Penn Theater, located at Euclid Avenue and East 55th Street, Cleveland, Ohio. It is a remarkably elaborate temple of photodrama, both inside and out. At present the auditorium seats 650, but plans have already been made for an additional 350, to be placed in a balcony which is soon to be built. The appointments at the Penn Square Theater are sumptuous and insure the comfort of every patron.

“Particular attention is paid at the Penn Square to the matter of projection, and there are numerous ingenious electrical devices, which have been built for the better presentation of the picture upon the screen. The operating room is a veritable jungle of electrical apparatus, and resembles an electrical laboratory which, in fact, it is. There are several different voltages of electricity coming into the building, all of which pass through special apparatus for improving illumination. Needless to say that an operator who can hold this job at the Penn Square Theater, can make good anywhere.

“The manager is Mr. Emil C. Meyer, who ably conducts the establishment. The Penn Square people are putting up another theater at Woodland Avenue and 38th Street, which will have a seating capacity of 1,600. This new theater will also be managed by Mr. Meyer.”It’s possible that the Penn Square Theatre was designed by Cleveland architect George Allen Grieble. The item about terrazzo floors I cited in my previous comment refers to the Penn Square Theatre and Building, and a biographical sketch of Grieble published in the early 1920s lists a Penn Square Building as one of his projects from 1911.

I’ve been unable to confirm that these were the same project, though. The office block and the theater might have been designed separately. The Penn Square Theatre’s front is certainly far more ornate than any of the other three theaters Grieble is known to have designed around the same time (the Olympia, the Alhambra, and the Gordon Square), though a bit of its decoration does resemble part of the less elaborate decoration on the Alhambra.

The original 1911 facade of the Penn Square Theatre can be seen in the photo I just uploaded. I’m not sure when the alterations were made, but the photo showing the much plainer front that replaced the original must date from 1928, the year Must We Marry?, with Pauline Garan, was released.

The 1911 article I cited did say that there were already plans to add a balcony to the house, so perhaps the front was remodeled at that time, maybe not long after the theater opened. The modernized facade was a bit taller than the original.

Joe – its difficult to believe that the image in Moving Picture World and the photo you post are the same theater project, even with the addition of a balcony level. Have you done any more research on this? Also I note that you credit George Grieble with the Alhambra. Yet the City Landmarks people only list the Gordon Square theater. Do you have a source that connects Grieble with the Alhambra? One more question – interested in how Knox and Elliot got the commission to design the Hipp – one of the largest theaters around. They were not theater specialists and I would love to know more about this project. J. Love

jlove: I’ve tried to discover when the Penn Square Theatre’s facade was remodeled, but no luck so far. The change in the front from the 1911 photo to the 1928 photo is indeed drastic, but I’ve found no evidence that the Penn Square ever changed locations so they must be the same building. There are clues in the adjacent buildings, especially the one to the right, which shows many of the same first and second floor details in both photos, though it appears to have lost its cornice before 1928.

Like a number of other architects of the period, George A. Grieble studied architecture through correspondence. This advertisement for International Correspondence Schools, featuring a biographical sketch of Grieble, appeared in various publications in the early 1920s, and it mentions both the Alhambra Theatre and the Penn Square Building as being Grieble’s designs. The Cleveland Landmarks Commission lists both the Gordon Square and the Olympia Theatre as Grieble’s designs.

I don’t know how Knox & Elliot got the commission for the Hippodrome project, but it is not unheard of for an architect to design only one or two theaters in a career. I do know that Max Faetkenhauer, who commissioned the theater, was experienced as a theatrical manager as well as being a composer and orchestra conductor, and it could be that he had ideas of his own about how a theater should be designed, and he didn’t want to bicker over them with an experienced theater architect, preferring an architect who would defer to him. Faetkenhauer’s partner in the project, former mayor Robert McKisson, would undoubtedly have been acquainted with Knox and Elliot, and likely would have considered them a good choice for the rest of the project, which included two large office buildings.

The Penn Square Building designed by George Grieble must have been a different building than the Penn Square Theatre. A Cleveland Landmarks Commission page about architect Morris Gleichman (PDF here) lists the Penn Square as his design, dated 1911. It is listed as “Penn Square Motion Picture Theatre for Joseph J. Klein” with the address 5409-15 Euclid Avenue. An item in the August, 1911 issue of Motography also mentions Klein in connection with the Penn Square:

“The Penn Square is the name of a new moving picture theater opened at East Fifty-Fifth street and Euclid avenue, Cleveland, by the Penn Square Amusement Company, of which the following are the directors: S. M. Hexter, Louis Klein, Joseph J. Klein, Syl Flesheim and Frank I. Klein.”

The Landmarks Commission list attributes five Cleveland theater designs to Gleichman. The other four include the Empire and Prospect, already attributed at Cinema Treasures, and a 1907 house called the Majestic, 1775-83 West 25th Street (but listed at 1771 West 25th in the 1914-1915 American Motion Picture Directory,) and a house called the Lafayette, with no date and no address. Neither is yet listed at Cinema Treasures.