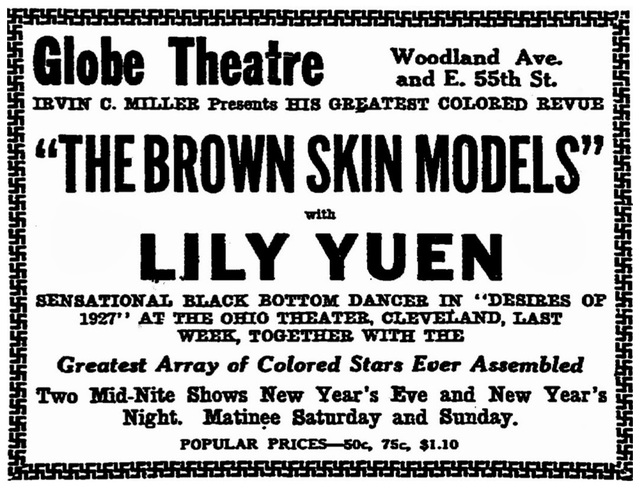 The Globe Theater is shown on the 1912-1913 Sanborn Street Map. Seating was provided in orchestra and balcony levels. In the 1920’s it was an African American theatre, part of the TOBA Circuit presenting movies and vaudeville. In 1922, the Globe Theater adopted a poly of catering for patrons of both races. In 1923 Bessie Smith appeared on stage, and returned again in 1929 in the show “Steamboat Days”.

In the 1930’s the Ahmediyyih Muslim Community rented space above the lobby to be used as the Cleveland mosque. The Globe Theater was listed in the Film Daily Yearbook 1955 edition as a Negro theatre. It closed in the 1950’s, and its auditorium was never used again.

The lobby was remodelled and became the Ebony Boy Barbecue take-out eatery. The Globe Theater and surrounding building were later demolished. The site is an empty plot of land in 2014.

The Globe Theatre on Woodland Avenue is briefly mentioned in this item from the September 9, 1916, issue of The Moving Picture World:

“Cleveland, O.—The Freer Theater Company, just organized, has announced the purchase of three picture theaters here. The theaters are the Haltnorth, Globe and Fountain, all in the vicinity of Woodland avenue and E. 55th street. M. B. Horowitz and Louis Israel head the company.”I’ve found no later references to a Freer Theater Company, but M. B. Horwitz (the correct spelling) and Mr. Israel remained in the exhibition business and were mentioned a number of times in the trade publications.