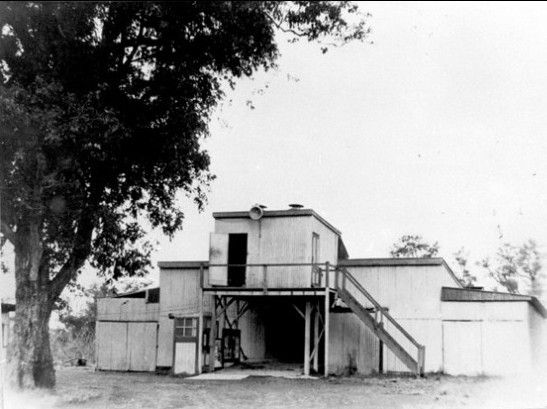 Located at the corner of Khartoum Road and Waterloo Road in the northwest Sydney suburb of Macquarie Park, just to the north of North Ryde. A true anomaly in theatre going, the Khartoum Theatre was an open-air theatre which opened on 29th January 1938 with “The Plainsman” and “Easy to Take”. You could expect to find open-air theatres in hot places like Bourke, but this one was in a suburban location.

At the time Macquarie Park/North Ryde had not been developed, and attracted artists who painted the orchards, market gardens, farms and waterways. The theatre was on the corner of an orchard and was owned by Mr. N. Johnstone who later partnered with Jack Peckman who doubled as a projectionist. The building housing the entrance and projection booth was made of timber and currugated iron. It had a partial roof, but most of the seating was out in the open. Entertainment at the interval might be a wood chopping contest, and if heat was needed, fires were started in 44 gallon drums.

Locals referred to it as ‘the shack’, but it was popular enough to run until 1966 when it closed with Marlon Brando in “The Wild One”.

Competition arrived when the Skyline Drive-In opened only a block away in 1956 but, as usual, TV was the deadly competitor.

Remember the fires in the 44 gallon drums well. Saw movie “The Egyptian” with Edmund Purdom. Interesting, information on this theatre posted by John Gleeson. I went to Marist Bros Eastwood with a “John Gleeson”!

Interesting to note that the patrons' seats under the roof were priced at one shilling and sixpence(and they were padded) whereas those in the open cost one shilling (wooden)– these were the charges in 1938. The opening night on Sat.January 29, 1938 saw the screening of Cecil B. De Mille’s “The Plainsman” with the support movie “Easy to Take” During the colder months, the fires (burning coke in 44 gallon drums) had to be lit at least a couple of hours before screening commenced so as the smoke would disperse!

Site is possibly now an office?