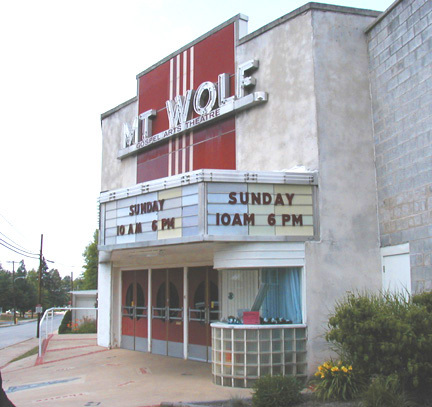 Located in Mount Wolf, close to Manchester. The Mt. Wolf Theatre was opened October 17, 1947 with John Hodiak in “Desert Fury”. It was closed in 1984. The building is now in use as a church.

Last Movie shown was ET – The Extra Terrestrial in 1984.

The Mt. Wolf Theater was built in the 1940s by Mark Rubinsky, who operated a chain of nine small second-run houses throughout South Central Pennsylvania, including the Capitol in Harrisburg’s Allison Hill neighborhood, the Lyric in Dallastown and the Newville Theater, among others. In 1949 Rubinsky sold his theaters in order to build the Uptown Theater in Harrisburg. From 1949 until it was closed and demolished in 1972, the Uptown was one of the Capital City’s classiest film venues.

The Mt. Wolf Theater served the adjacent communities of Mt. Wolf and Manchester, north of the city of York, and was located on a corner in a tree-lined residential neighborhood. The interior, as I recall, was mostly green with contrasting vinyl seating for about 500, I’d guess. Nothing fancy. As years of neglect took their toll, the Mt. Wolf was closed in the 1980s and sat vacant for several years.

In the 90s it got a new lease on life when it was renovated and turned into a gospel music dinner theater. It was also used for other forms of dinner theater and concerts and today houses the Mt. Wolf Community Church. I don’t believe the dinner theater is still active as I haven’t heard anything about it in years. The marquee and façade are still as they were in the 1940s. Too bad movies are gone, as these communities could support a well-run local theater, but at least the Mt.Wolf is being maintained and is an attractive part of its neighborhood.

Address is correct but maps about 2 blocks northeast of the actual building. It is now the Mt. Wolf Community Church. There isn’t a street view of it but there are two pictures on Google Maps, one of the exterior and one of the interior of the church and they are showing a movie, but not on the original screen which appears to be gone unless it was really small.