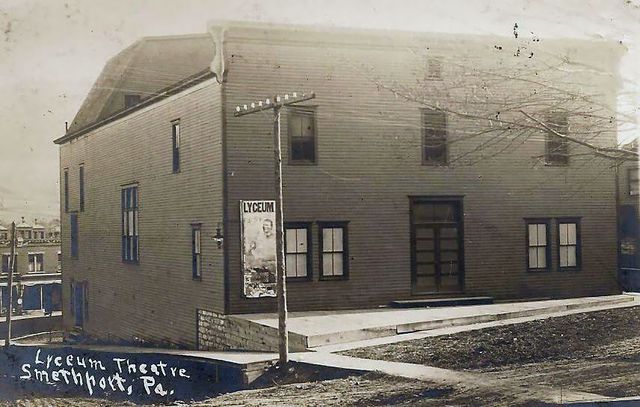 In December 1904, one of the first functions at the newly-constructed Lyceum Theater at the corner of King Street and Mechanic Street in Smethport, was a Christmas Day service for members of the congregation of an unfinished church nearby.

The 1908-1909 edition of Julius Cahn’s Official Theatrical Guide lists the Lyceum Theatre at Smethport as a ground floor house with 710 seats.

The Lyceum apparently opened in 1904, not 1906. The entry for St. Elizabeth of Hungary Catholic Church in a tour book of Smethport says that the church building burned just before Christmas, 1904, and that the Christmas Mass that year was held at the newly-constructed Lyceum Theatre.

A list of corporations chartered in Pennsylvania in 1902 includes the Smethport Lyceum Company, incorporated on November 14 for the purpose of building and operating an opera house at Smethport.

After WWI, the building was bought by the American Legion, and it is mentioned in various publications of the 1920s and 1930s as the Legion Lyceum. I haven’t found any indication that the house ever operated on a regular basis as a movie theater. Our page for the Star Theatre, Smethport’s other theater, says that it opened in 1906 as the Kerr Moving Picture House. With 410 seats, it was probably sufficient to this small town’s demand for movies.