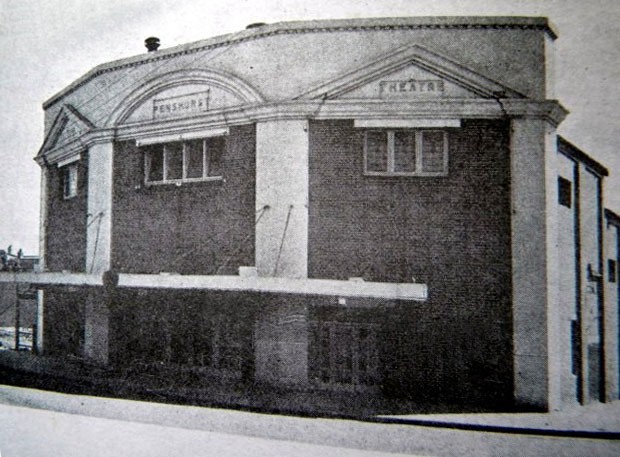 In August 1925 Hurstville Council approved a plan by W. Nash to build a picture theatre next to Penshurst Station. It would be a brick structure with an ornamental facade and seating for 1,100 on very comfortable new design seats. The theatre could also be used as an assembly hall and a space measuring 62 by 35 feet will be set aside for dancing.

Penshurst is a small suburb which lies across the local government areas of the City of Hurstville and the Municipality of Kogarah. It has a modest shopping area and the arrival of large theatres like the Penshurst Theatre and the Odeon Theatre was a big event.

By the 1930’s ownership of the Penshurst Theatre passed to Mr. E.M.Smithson. It closed in 1954 and was converted into a supermarket and fitness club.

I was raised in Penshurst from 1946 and went to this theatre for many years. It was open well past 1954 as I and my family remember going there in our teens at least, making that the late 1950s.

Shame there are no photos of the neighbouring Mortdale cinema as we went there almost every week.

I also used to go to the movie shows at Penshurst Odeon Theatre. My last time was to see “First Men In The Moon” in January 1965. Not long afterwards it was sold to the “Tom The Cheap” supermarket chain and closed. During the early part of the building’s conversion to a supermarket, it was badly damaged by fire. This occurred on the afternoon of Friday, April 8, 1966…fifty years ago this very day.

Brian’s – I have a photo of the old Mortdale Paramount Cinema in Railway Pde.

The supermarket is IGA(Penshurst IGA). There is also a liquor store. Name of the fitness club unknown?