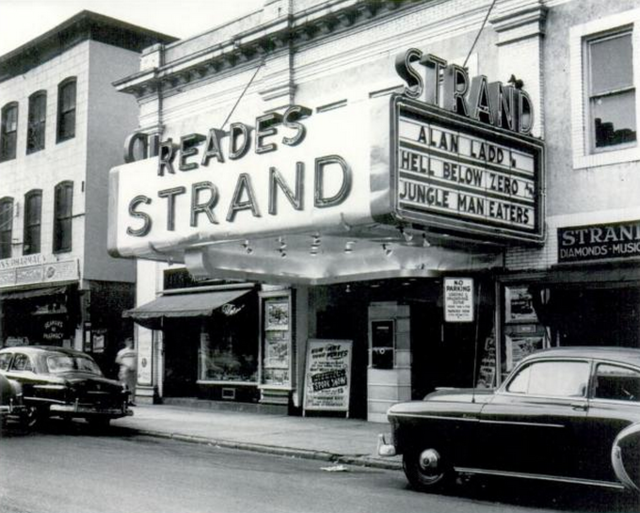 Originally the George West Furniture Store which was partially demolished. The 1,300-seat Strand Theatre was opened on October 22, 1917 with Milton Sills in “The Honor System”. It was located near to the Hotel Packer. On June 1, 1924 it was taken over by the Walter Reade chain who were the operators for the remainder of its life.

The Strand Theatre was still open in 1957. The building was gutted and converted into a supermarket.

A Strand Theatre was listed among claimants to damages resulting from an October, 1918, explosion at a munitions plant in Perth Amboy. The list was published by the U.S. Senate in 1919. The operators of the Strand, Counihan & Shannon, received a payment of $159.00 as compensation for broken glass and structural damage.

The Strand was still in operation in 1924, when it was mentioned in an issue of the quarterly publication Liberty. Manager John Bullwinkel had been arrested for violating the town’s Sunday blue law.

an update for the Strand…

THE Smith Street Realty Company was formed in the spring of 1916 by property owners located on Smith Street, between High and State Streets in downtown Perth Amboy. The sole purpose of the Company was to build a theatre on their block, to attract foot traffic and increase business.

The West Furniture Store was purchased for the street frontage, it was announced the new theatre would be ready by the fall of that year. However, the property was too small for what the investors envisioned and the next several months were spent purchasing additional properties and contracting an architect and builder. Work finally started in December, the original West building was gutted and partially razed, with portions incorporated into the new structure at the discretion of the contractor. The architect engaged was Joseph Duke Harrison of New York, the general contractor in charge of construction was Ira R. Crouse, a local fellow.

The following July, it was announced that Willian J. Counihan and Michael L. Shannon, who had built and still operated the Majestic Theatre a few blocks away, had leased the new venue, to be named the Strand. They claimed it would be operated “along the same lines as the Strand theatre in New York City, running big feature photoplays”.

Originally scheduled to be ready in mid-September, The Strand opened on October 22, selling out three showings of “The Honor System”, a 10 reel feature from William Fox.

A full page article in the December 1st issue of the Motion Picture News described the Strand as occupying a plot 61 feet wide by 166 feet deep, its frontage composed of glazed white brick and marble with a small retail space on either side of the lobby entrance. The lobby itself was done in stucco and paneled, each panel having a picture of one of the stars of the day displayed. The auditorium contained an orchestra and balcony seating 1,300 total, the walls had panels with murals. There were eight boxes, four on either side of the stage, each seating nine people. The stage itself had elaborate scenery surrounding the screen, which would be changed from time to time. The orchestra pit ran the length of the stage and the Strand employed an orchestra of 20 to fill it. The ceiling was of decorated steel, in the clear rising 28 feet. Two Simplex machines were used for projection.

In May 1924, Counihan and Shannon sold the Strand, Majestic, and their theatre in Plainfield to Walter Reade, who took over operations on June 1st. His announced plan was to remodel/build the Strand, nearly doubling its capacity. This didn’t happen, instead the Majestic got the upgrade. The Strand was still showing movies in the spring of 1957, and still operated by the Reade organization.

An ad for its 1917 opening has been added to the photo page.