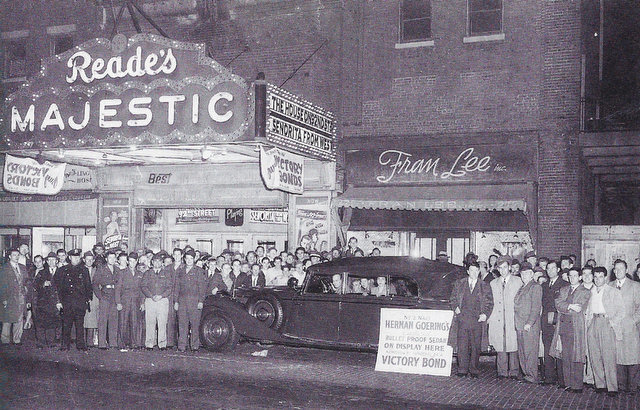 Former vaudeville theatre dating back to at least the 1910’s. It was remodeled by architect William Hohauser in 1949. Currently serving as a church.

According to a history book about Perth Amboy (google book preview available here View link ), this theater was actually owned by Counihan and Shannon as a playhouse before it became Proctor’s and was turned into a vaudeville stage. I’m guessing that at some point in the late 1930s or early 1940s it was purchased by the Walter Reade Organization, renamed the Majestic, and started showing movies, since it was already quite popular by the mid 1940s. The link above also has two pretty good pictures, on page 63.

Regarding my previous post, it appears I made a mistake. By the Great Depression, the Majestic was already showing double features. It must have been purchased by Walter Reade during the 1920s. (source: View link )

If anyone is interested, I posted a current photo of the Cathedral International (Majestic Theater):
http://www.panoramio.com/photo/23156841

The church started as the Second Baptist Church in 1892, founded by 35 African-Americans. The church had several buildings around town until moving into this structure in 1992.

I haven’t been able to discover the original architect of the New Majestic, but Boxoffice of March 5, 1949, said that the architect for a recent $150,000 remodeling was William Hohauser. A major feature of the remodeling was the installation of a 200-seat television lounge on the mezzanine level of the theater. The New Majestic was then operated by Walter Reade Theatres.

Here’s an article on the TV lounge. There is another picture on the cover of this issue: http://www.boxoffice.com/the_vault/issue_page?issue_id=1949-3-5&page_no=20#page_start

The old Perth Amboy High School was located on State Street in the downtown area. I don’t know when the tradition began but the senior class graduation ceremony would always take place at the Majestic Theater. Much more seating room for friends and relatives than the school auditorium. I was a graduate of the Class of ‘71 and a member of the last group to have the festivities take place in that great old theater. The following school year would see the opening of the new high school several miles away in another part of town. As we all filed into the Majestic the X-rated advertising was still on display as that’s what the theater was showing at the time. From what I remember they would occasionally switch to mainstream movies but porn apparently proved more lucrative and that is what they stayed with until the the theater finally closed some years later.

markp, fascinating with your dad and uncle working at the Majestic and Royal. I have fond memories of going to both theaters countless times growing up in the 60s. The Majestic was the classier operation but the Royal had its own particular charm despite the musty smell, worn seats and frayed carpeting. There were one or two elderly gentlemen we’d always see I’m assuming owned or operated the Royal. Unlike the Majestic which had uniformed ushers these old codgers were right on top of any potential trouble in the auditorium and wouldn’t hesitate to eject any youthful offenders.

I remember as a kid in the mid 70s I used to like to call the theaters to listen to their recordings…it was a cool new high technology! Anyway, I remember a gravelly voiced woman usually did the Majestic recording, rather formal, pronounced it “thee-a-ter”