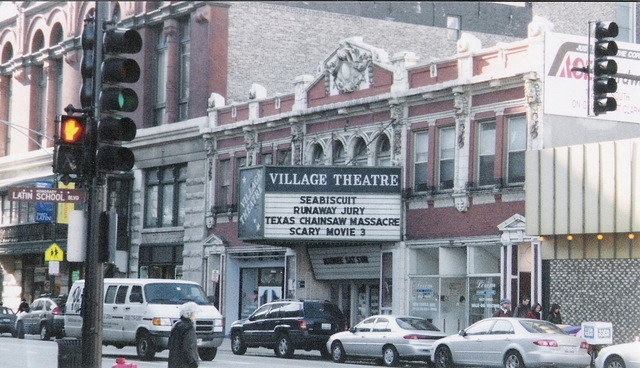 Built as the Germania Theatre and opened July 29, 1916. It changed name to the Parkside Theatre after the US entry into World War I when anti-German sentiment was running high. The theatre later went through a couple of other name changes over the years including the Gold Coast Theatre in January 1934 and the Globe Theatre. The theatre is located on N. Clark Street at Germania Place in the Old Town neighborhood of Chicago.

Prior to being divided into four small auditoriums in the early-1990’s, the theatre could seat 900. Little remained of the original interior design, but the facade, despite being almost entirely hidden behind an ugly modern marquee, was still intact and featured red brick and beige terra-cotta highlights.

Long a popular venue for art, foreign and cult films, the Village Art Theatre was closed in March 2007. In April 2018, the Village Art Theatre and neighboring buildings along North Avenue were demolished to make way for construction of the Fifteen Fifty on the Park condominium building. The landmarked (2009) facade of the former theatre will be preserved and will be incorporated in the new structure.

The marquee was removed sometime this week. I’ll get photos tomorrow.

OK I’ve added some photos from today with the marquee removed. It exposed some original recessed lighting over the entryway, as well as vertical and square lighting previously hidden by the marquee. 10 vertical fixtures per side, and 14 fixtures per side in a square pattern, that had been encapsulated by the framing for the newer marquee.

March 1st article with more photos. Be sure to click on the “Building Up Chicago” link mentioned at the bottom, for more pics with the containers that have been out in place to store the facade pieces.

Demolition on the auditorium has begun, broken through the wall on the North elevation. Monday would be the next day to get photos, as they will likely finish off the auditorium then. Contrary to what I previously mentioned, the facade will not be removed, numbered and replaced. I originally thought that due to the 3 containers stacked in front of it. Instead it will remain in place, anchored to those 3 containers via I beams for the duration of demolition and new construction. I had thought of the removal & replacement scenario, because that is what was done to the Cedar Hotel on State Street at Cedar. But that facade did not have landmark status. It was just thankfully saved and reattached to the new structure behind it, to appease the neighborhood and alderman in the early discussions. I have uploaded a few photos from today of the facade reinforcement and the broken through North elevation auditorium wall, as visible from North Avenue.

Thanks for all the updates to what I knew as the Globe Theatre!

Received an update from the developer that includes additional photos of progress, showing the facade from above.

Yet another rendering, with an address typo under the image.

Sharing this June 2018 link because it has close-ups of some of the stone details.

Four images of the restored, reassembled facade added. Preservation Chicago was instrumental in getting the developer to relocate the building’s main entrance to the former theatre entrance, from the corner where it was originally planned to be.

Had a few interesting experiences with this theater many years ago when it was still operating. Namely the cashiers who were annoyed at any customer who happened to walk though the door and the ticket tearer who would literally curl up in a ball and nap on a bench between films. Ahh, the stress of working at an empty arthouse on a Sunday afternoon.