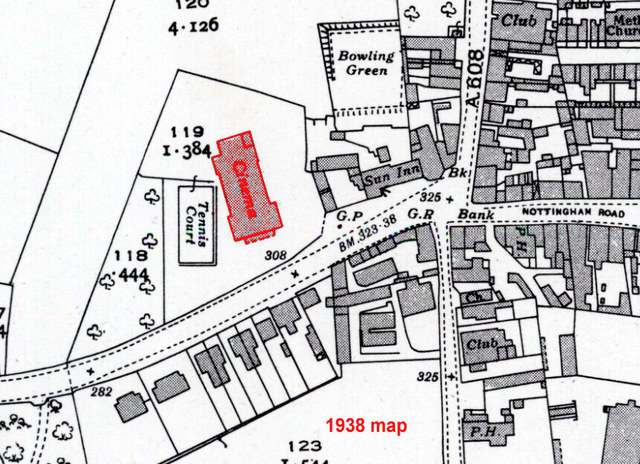 Located in Eastwood, Nottinghamshire, on the Sun Inn Croft, Derby Road. Parker’s Picture Palace had originally been built on the site in 1910. It was closed around 1920, and demolished.

The Rex Cinema was built on the vacant land in 1938. It opened on 7th November 1938 with Sonja Henie in “Lovely to Look At”. It was designed in a ‘modern’ style by local Eastwood architectural firm Wheeler & Co., headed by architect A.G. Wheeler. Seating was provided for 650 in the stalls and 200 in the balcony. There were decorative grilles on the side splay walls on each side of the 28 feet wide proscenium. The stage was 15 feet deep and there were three dressing rooms. It was equipped with a GB Duosonic sound system.

The Rex Cinema was equipped with CinemaScope in 1955. It was closed on 4th June 1966 with John Wayne in “The Sons of Katie Elder”. It was converted into a bingo club in August 1966. Bingo continued until it was closed in 1987. The building was demolished in 1992.