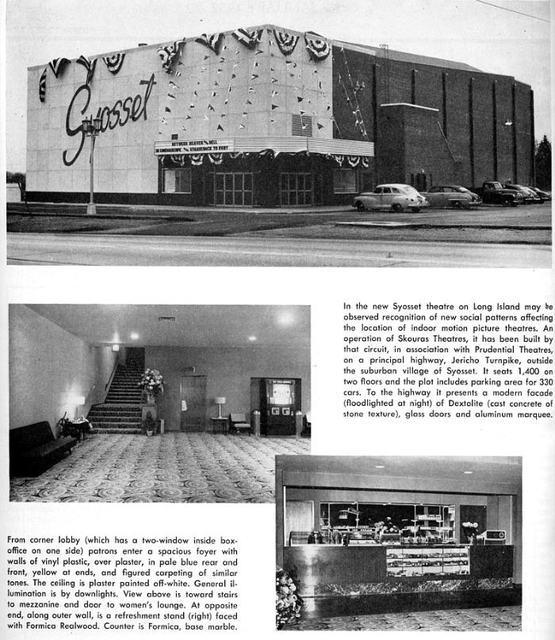 Originally constructed as a modern single screener in 1956, opening on October 20, 1956 with a special benefit screening of Gordon MacRea in “Oklahoma!”. It was equipped with Todd-AO. Seating was provided for 1,400 in orchestra and balcony levels. Later taken over by United Artists.

It was triplexed many years back, and closed in May 1989. It was finally razed for retail space in the early-1990’s.

Hey, can I get in this discussion? My name is Tom Montalbano. I am a lifetime Syosset resident (born in 1962) and I have written a couple of books about my hometown.

My current project is a history of commerce in Syosset from the 1800’s forward, so the information I’ve gathered from this forum about the Syosset Theatre has been really helpful. FYI, the former site of the triplex theatre is now the parking lot for a Marshall’s store, a Petco, and a few other businesses. The old UA150 building is now an exercise salon.

Hey, I am also a big Beatles fan and I always wondered if either “A Hard Day’s Night,” “Help!,” “Yellow Submarine,” or “Let It Be” ever played either theater. If so, I’d love to see the ads.

I noticed a few comments about the former manager at the Syosset Theatre having moved over to the indoor theater they built at the old Westbury Drive-In. On a recent visit to the Westbury, there WAS an elderly woman tearing tickets. Could this be her? She’s still alive? Is this the woman who used to terrify my stepson when he worked there for a short time?

OK, wow…you’re really into this theatre thing, eh? It’s a pleasure to see people so passionate about anything these days!

My newest book is going to be a giveaway that will probably be sponsored by the Syosset Chamber of Commerce. I am doing it gratis, as I did with my Syosset Fire Department 100th Anniversary book. Who would I need to ask for permission to use some of the Syosset Theatre ads posted here?

Tom, I worked in Syosset and the D-150 in 1977 and during that winter’s blizzard, I was “strand"ed for 3 days at the theatre. I lived on pre-popped corn and a couple of Nestle Crunch bars. The M.D. Mr. Logue made sure I was paid for the closed days. At the Syosset, we played "Semi-Tough”, “Pete’s Dragon” and “House Calls” At the Cinema D-150, I remember “Coma” during blizzard, and “The Goodbye Girl” whose credits I never missed because the “Goodbye Girl” theme played as the house curtain closed. 40 years ago, how time flies. I was 21 years young.

Did any general-release films play here in 1968 in between the roadshow runs of “Gone With The Wind” and “Star!”?

Hi Orlando, I would like to know who you are. I worked at the Syosset theater also from 1976-1978. Lots of good times there and I definitely remember Mr. Logue. I worked with Walter Wagner, Keith & Mark Jaeger, Ray Serzanin and others. Some of the girls were Irene, Deidre, Diane. My name is Steve.

Which booking followed the Syosset’s roadshow run of “Paint Your Wagon”?

Probably a cleaning crew to clean out the cobwebs…

Cobwebs? I realize “Paint Your Wagon” has the reputation of being a flop, but it did, believe it or not, perform very well in some locales. For instance, it played reserved-seat runs for nine months in Dallas, Los Angeles and Vancouver. And in San Jose, it played over a year.