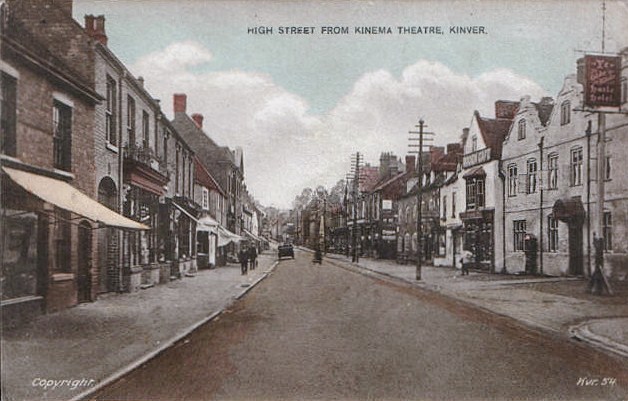 Located in the south Staffordshire village of Kinver, to the south-west of Stourbridge. The Kinema Theatre was opened on 9th May 1921 with “Queen of the Sea”. Designed by Dudley based architectural firm Webb & Gray, it had seating provided all on a single floor. It was a reverse cinema, with the projection box behind the façade.

The Kinema Theatre was closed as a silent cinema in 1930, unable to upgrade with sound equipment. It lay empty and unused until September 1939, when at the outbreak of World War II, it was converted into a fire station, with the front of the building removed and replaced by large doors to accommodate the fire engines. After the end of hostilities in 1945, the building became unused.

In 1955, it was sold to Sydney Hillman, and he set about reconstructing the building to become a cinema again. It was equipped with an RCA sound system and a new projection box was built on the outside of the building at the rear of the auditorium (the original projection box was within the auditorium). It had a 27 feet wide screen on which to show CinemaScope films.

The Kinema Theatre re-opened on 2nd April 1956 with “The Student Prince” starring Edmund Purdom. The Kinema Theatre was closed in August 1961 with Victor Mature in “Samson and Delilah”. The building was eventually sold to the local council. The seats were sold to a bingo club in Blackpool, and the projection equipment was also sold off. It was demolished in 1964, and a health clinic was built on the site.

For the life of me I cannot see the picture of the Theatre… Answers please :o) my eye sight is getting bad..

Mike; Great street view. The Kinema Theatre is just out of shot on the right of the photo. It was located almost next to the Ye Olde White Harte Hotel, which is seen on the right, and still exists today.

In the 1955 rebuild the auditorium was turned around with the screen at the high Street end behind the small foyer and entrance.A new projection box was built at the rear of the building. I remember the cinema standing intact but unused in the early sixties.