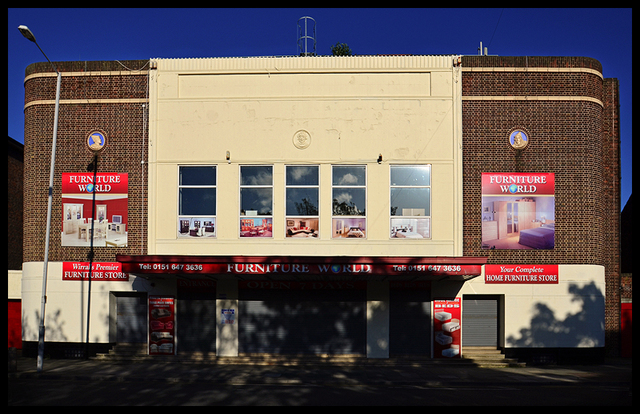 Built on the site of the Electric Theatre/Park Cinema (which has its own page on Cinema Treasures). The Gaumont was opened on 30th May 1938 by Gaumont/GTC with George Formby in “I See Ice”. Film star Nova Pilbeam attended the opening, and her hand prints were set in cement on the pavement to the right of the entrance. Seating was provided for 1,128 in the stalls and 326 in the circle levels. It had a 40 feet wide proscenium, the stage was 18 feet deep and there were seven dressing rooms. It was equipped with a British Acoustic(BA) sound system.

It was closed by the Rank Organisation on 4th January 1964 with June Lockhart in “Lassie’s Great Adventure” & James Mason in “Journey to the Centre of the Earth”. It was converted into a Top Rank Bingo Club which opened on 16th April 1964. The bingo club closed on 1st November 1986. It then became a snooker club, which closed in 1990. The empty building then suffered damage from a fire.

It was re-opened in December 1993 as a roller skating rink (the former Electric Theatre/Park Cinema which first stood on the site had been built as a skating rink). In recent years it has been in use as a Furniture World furniture store, converting the auditorium into four levels. The building was sold to property developers in late-2020 who plan to convert it into 30 flats.

The former Gaumont is largely intact inside in it’s new use as a store. Some photos from 2010:–