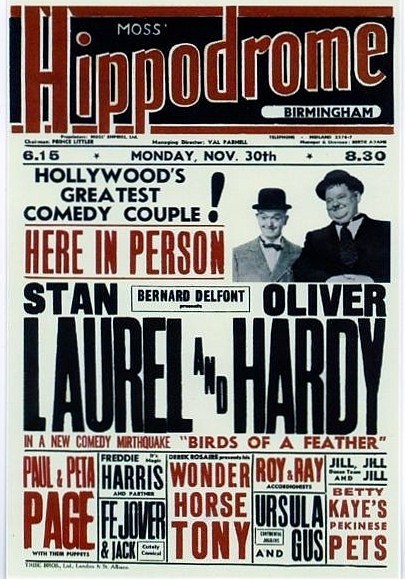 Located in Birmingham city centre. The Tower of Varieties & Circus was opened on 9th October 1899. It was built for Henry & James Draysey, and featured a circular circus ring, surrounded by seating and in a galley on three sides, to give a total seating capacity for 3,000. It was designed by Birmingham architect F.W. Lloyd. A feature of the exterior of the building was a tall tower, topped by a Minerat, designed in a Moorish style (this was demolished in the 1960’s when it was found to be unsafe). The Tower of Varieties & Circus was not a success, and had closed by the end of 1899.

The auditorium was redesigned (again by architect F.W. Lloyd) into a conventional proscenium theatre, with 2,000 seats in orchestra, dress circle and galley, with six boxes, and it re-opened on 20th August 1900 as the Tivoli Theatre of Varieties with a variety programmed headed by Chung-Ling-Soo & Co. ‘the marvelous Chinese magician’.

In 1903, it was taken over by Tom Barrasford' chain of variety theatres and was re-named Hippodrome Theatre of Varieties (sometimes known as Barrasford’s Hippodrome Theatre). Films were introduced as part of the variety programme, billed as Hippodrome Pictures - shown on the Bioscope. Famous music hall stars such as Marie Lloyd, Vesta Victoria, George Robey and W.C. Fields appeared here. The Hippodrome Theatre of Varieties was closed on the outbreak of World War I in 1914, and remained closed until 1917, when alterations were carried out by noted theatre architect Bertie Crewe, and it re-opened as a cinema, which closed in 1919.

It remained closed until 1925, when it was taken over by the Moss Empires Theatres chain as the Hippodrome-Birmingham. It was remodeled in a Neo-Classical style to the plans of architectural firm Burdwood & Mitchell of London, and the gallery was removed, and was replaced by a single large dress circle. It was leased out to the General Theatre Corporation and taken over by the Gaumont British Theatres chain in May 1928, but films were not shown (stage shows were booked), and soon the lease reverted back to Moss Empire Theatres. Big name stars such as Gracie Fields, George Formby, Duke Ellington & Thomas ‘Fats’ Waller & Billy Cotton & his band, plus from New York’s Broadway Tallulah Bankhead all made the Birmingham-Hippodrome the top theatre in the Midlands.

In the 1950’s singers, Frank Sinatra, Cliff Richard, Tommy Steele appeared, as did productions of musicals “Annie Get Your Gun”, “Brigadoon” and “Carousel” played here. Annual pantomimes were introduced from Christmas 1957 when Beryl Reid starred in “Jack and the Beanstalk”.

In 1963, the facade of the theatre was rebuilt to the plans of architect Edwin M. Lawson (and the original tower was removed). The Beatles appeared in November 1963, and in the 1960’s shows such as “The Black & White Minstral Show”, “A Funny Thing Happened on the Way to the Forum” and Tommy Steele in “Hans Anderson”. In 1963 it was re-named Birmingham Theatre, but reverted back to Hippodrome in 1972.

In 1979, it was purchased by Birmingham City Council and leased to the Birmingham Hippodrome Theatre Trust. The original stage and fly tower were demolished in 1985, and new, much larger ones were built to the plans of architectural firm J. Seymour Harris Partnership. The Birmingham Hippodrome Theatre remains a top touring theatre in the U.K., and presents touring productions of West End shows, ballet & opera, and the annual pantomime.

Chung-Ling-Soo. If my memory is correct was an Englishman.. He had a famed trick of catching a bullet in his teeth.. Hmm.. The trick went wrong.. He lived long enough to tell them to close the tabs..

Mike: Chung-Ling-Soo was shot in the chest in front of a packed house at the Empire Theatre, Wood Green, London, on 18th March 1918, after his bullet catching trick went wrong. I believe he was American, but could be wrong.

Ken you are right… He was American.. Memory is a Problem for us over 30’s :o)

The first replacement I thought was designed by someone colour blind… The only thing they got right was the Doors. The current one.. To much glass.. sorry call me old fashioned :o)