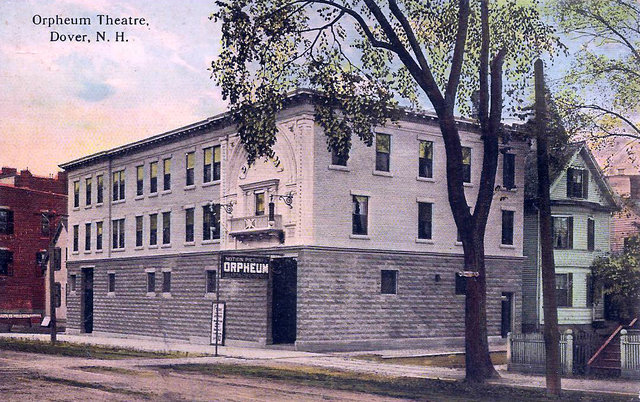 The Orpheum Theater in Dover was once a movie theater. In 1935, it was renamed State Theatre. Closed by 1954, it was given a rough conversion into the offices and machine shop of Robbins Auto Parts. Robbins in general is a pretty cobbled together place.

You can enter through the rear of the former theater and go down a narrow passage with short ceilings past the machine shop. Barely visible, as you tun, are the remnants of a tin ceiling. You then pass turn again, and go through an ancient sliding fire door into the "showroom".

The only parts of the Orpheum remaining are the black painted arched letters over a second story half moon window. Not worth the trip, kids.

Luckily, though, Robbins have not been poor stewards of Dover, NH nostalgia. They have maintained a "Pontiac Indian Chief" sign painted on the side of a building, and display a 1950’s neon and porcelin "GM PARTS" sign outside thier store.

Just found a picture of The Orpheum in its least glamorous form… who would have thought the auto-parts-store conversion would be such an improvement?

There is a MGM Theatre Photograph and Report form for the State Theatre in Dover NH. It includes an exterior shot dated April 1941. My copy is a washed-out Xerox, but it is the same building as in the photo link above. The entrance was at the right end of the building and there was a rectangular, rather nice, marquee. The movie playing was Charles Boyer in “Back Street”. The Report states that the theatre was on Mill Street, which is obviously wrong. The Report says that the theatre was not a MGM customer, that it was built about 1920, that it’s in Fair condition, and has about 450 seats, all on one floor. Competing theatres in Dover are listed as the Strand and the Broadway. The 1940 population of Dover was 13,500.

This theater operated as the State for about 17 years. From Boxoffice, February 23, 1935:

“The State is the new name for the Orpheum which was operated by Mike White for 25 years. Fred Couture is the new owner.”

“The State, Dover, N.H., originally built as the Orpheum, will be converted into three stores. The theatre has been under lease to Lloyd Bridgham for the last five years, but he was forced to close the doors two years ago because of lack of patronage.”