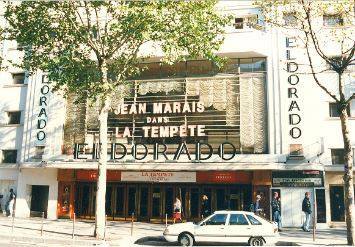 Located in the north of the city centre. The Eldorado was originally a music hall where the Lumiere brothers presented their Cinematographe on 29th March 1896. By 1900 films were being presented as part of the music hall programme.

In 1932 the Eldorado was modernised in a splendid Art Deco style to the plans of architect Paul Dubreuil, re-opening on 3rd February 1933 screening the documentary film “Congorilla” & “Paris-Soliel” starring Claude Dauphin. It was a large 2,000-seat cinema with seating provided in orchestra and two balcony levels. It was closed in July 1981, after spending its final years screening action and Kung-Fu films. It was listed as a Historic Monument on 5th October 1981.