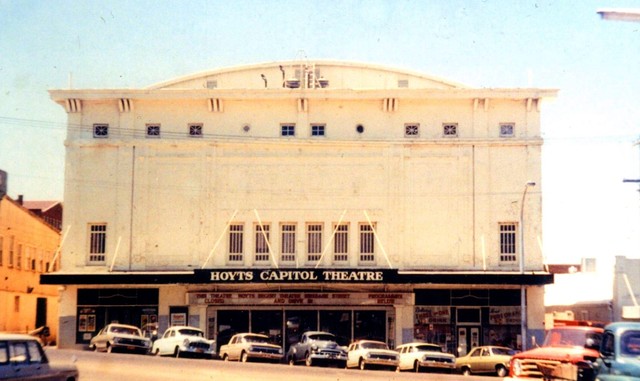 Tamworth is a town of about 50,000 and about 260 miles north of Sydney. Its the Country Music Capital of Australia so you might expect to find a large theatre. The Capitol Theatre was built in 1927 by Greek immigrant Zachariah “Jack” Kouvelis who arrived in 1910 at the age of 14 and quickly caught the theatre bug. He liked the name Capitol and bought up country theatres renaming many of them “Capitol” for his company, J.K Capitol Theatres.

He sold the chain to Hoyts in 1946 when they set up a new division, Hoyts Country Theatres Ltd. Hoyts operated the theatre until the late-1960’s when the advent of TV and the burden of a large old house became too much. A new owner took over, occasionally presenting live shows and concerts.

Tamworth residents were shocked in 1984 when he suddenly had the theatre demolished. A local music society executive admitted the building was in poor condition but was sad to see it reduced to a pile of rubble.

The Centrepoint Mall was built on Brisbane Street and included a six screen Hoyts cinema plus an adjoining live events theatre. As the mall included the old theatre site, Tamworth City Council was happy to name it the Capitol.