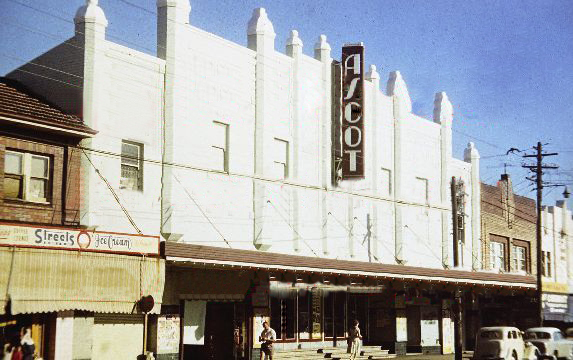 Built in 1925, this large wide cinema was a very popular venue for 31 years. Situated on a busy main road with excellent high profile shopping strip positioning the Ascot Theatre operated as if it was a city cinema, but in the suburbs. The nearby racecourse “the Ascot' honouring the British equivalent was later turned into Sydney’s main airport and the suburb renamed Mascot.

This theatre and it’s nearby sister cinema the Marina Theatre built in 1927, both originally built and operated independently screened identical programmes and swapped films at intervals. Vaudeville was commonplace alongside movies with both theatres built for limited backstage/orchestra presentations. In 1939 both theatres became part of the growing independent circuit Snider and Dean. Both remained so until 1960 when the Ascot Theatre was sold and converted to a shopping arcade. The Marina Theatre continued leased then sold in 1966.

Always a 1920’s style house, there were some Art Deco trimmings added in 1939. The Ascot Theatre’s programming was excellent with special events, stage gigs, midnight specials, matinees for shoppers, kids pantomimes, and value double features were staple offerings all through its life, and actually increased in variety once TV hit in 1956; movie premiere stunts: eg a parade (and newsreel coverage)for the 1957 film “Robbery Under Arms” with stagecoach with ‘Miss Mascot’ aboard, and in 1959 a huge stage show cabaret called ‘Viva La Femme’ with major jazz stars of the day. Also many pop appearances by Mascot’s own rock and roll group The Squares featuring girl duo Candy and Mandy. However, to no avail and by late-1959 both theatres reduced screenings to one a weekend.

The Ascot Theatre closed in March 1960 with the double feature “A Privates Affair” and “Tunnel of Love” allowing for all screen process to get a last airing, one film CinemaScope/colour the other widescreen/ b/w. 1960 was a disaster year in Sydney cinema with about 80 cinemas shutting/closing permanently/demolished. The Marina Theatre reopened 6 months later on Saturday nights and was somewhat reinvented in 1961, but without any renovations easily obtained from the Ascot Theatre’s excellent fittings.

The Ascot Theatre in 1961 was gutted and became a shopping arcade and indoor market with little cabins on a floor grid where the stalls once were. The stage and back wall were removed for a huge access roller door. Bags of cabbages and potatoes now stood where Yvette and her jazz ballet corp had so recently danced to Jimmy Parkinson’s orchestra. A metaphor for the times indeed. The Ascot Theatre balcony level became a hairdressers and offices, with a wall from the balcony to the roof. This operated until late-1964 when mid-night the whole building was engulfed in flames, the massive heat and subsequent fumes sending sheets of flying molten roofing frisbeeing across the roofs of the shopping strip and houses, igniting ‘meteor shower’ fires everywhere. Revenge indeed for a broken hearted cinema abandoned for tiny TV, one which served it’s community for 31 years. Going up in a bonfire of fury and trying to set the nearby houses on fire as the residents watched “Gunsmoke” on a ten inch screen.

The site is now a row of shops.