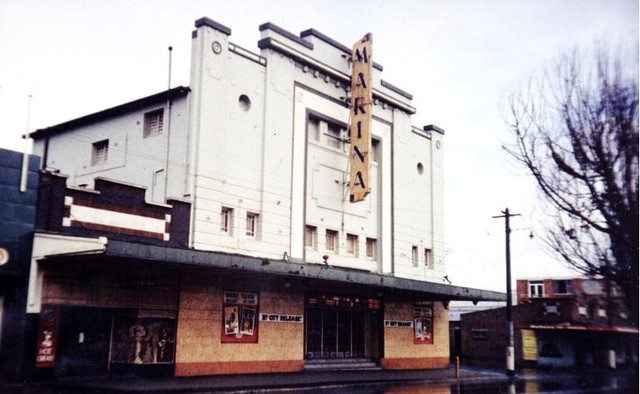 Located in the southern inner Sydney suburb of Mascot, at the corner of Gardeners Road and Sutherland Road. The Marina Picture Palace was opened on 24th June 1927 with Mary Pickford in "Sparrows" and John Barrymore in "The Beloved Rogue". Built for and operated by independent operators, one of the owners William DePruton was also an architect, and he designed the 1,210-seat building. The original silent screen was painted on the rear wall and had a decorated plaster surround. There was a small stage with dressing rooms located underneath it. The side-walls of the auditorium were quite plain, being decorated by panels, and the ceiling was made of pressed metal Wonderlich-type sheets. The main proscenium opening was rectangular in shape and was flanked by Corinthian columns. The projection box was built at the rear of the stalls, beneath the balcony.

From 1939 until the early-1960’s, the Marina Picture Palace was operated by Snider & Dean Circuit(S&D). After then, the cinema reverted back to independent lessee’s, and had a series of openings and closings. In the early-1980’s it was known as the Rosebery Cinema. Its last re-opening was on 1st October 1982, but despite playing good films and offering cheap priced matinee’s with coffee included, the Rosebery Cinema closed on 8th February 1984.

It was eventually operated as a video shop, which used the former stalls area, and retaining much of the original decoration, although the projection box was removed. In around 1997, there was talk of it re-opening as a cinema again, but this came to nothing and the video shop eventually closed by 2002. The building stood empty and unused for many years. In the 2010’s it was converted into 47 apartments.

The Rosebery Cinema building, photographed in May 2006:
http://www.flickr.com/photos/karsoe/150131435/
Photographed from a different angle in September 2009:
View link

Nice one, Ken. I’m putting a film together that’s set in a model like this, or the Star from Bondi Junction. Do you know who owns it, perchance?

I ran the Marina 1982 83 84 as a well programmed and operated movie theatre and sadly had to abandon my lease. As video simply ate our audiences and the maintenance of the building was beyond my income. The Marina in this new century and 2013 decade should be bought by council and refurbished to create a classic cinema complex and performing arts centre. It is a fortress building and worth repairing and retaining to delight future generations. I was a Mascot/Rosebery family child and saw dozens of films there in the 60s. The original vaudeville stage and facilities are still intact. Paul Brennan .au