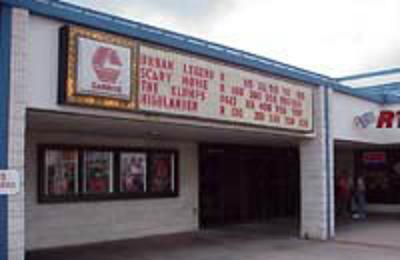 The Griffin Quad opened December 21, 1979 by Septum Cinemas. It was later operated by Cineplex Odeon. It was listed under Carmike Cinemas in 1995 thru closing in 2005. The Griffin Cinema 4 closed when Carmike opened the Griffin Stadium 10.

I’m confused as to who has told people that this and the Parkwood opened in the early 90s. Again, I don’t know when it opened but it was in operation in the 70s and 80s. I saw many a movie there when I was a kid. I saw Ghostbusters there.

It was at various points a Septum, Carmike and Cineplex Odeon theater. I think that might be the order in which the companies were bought by one another, right? I’m pretty sure that even though it went through different names we always called it the Septum. Because that sounded closest to septic tank. And in later years the theaters smelled. We weren’t very original with our insults.

The Hardees is actually still there. As is the Taco Bell although at the time I think it was still a Del Taco. And it’s certainly been rebuilt since then but it’s in the same spot. The entire shopping center is basically the same but the only stores still around from back in the 80s, when it was prime “hang out on a Friday night” real estate, are the Belk and the Radio Shack. Everything else is long replaced. This theater is now a low end clothing store.

This opened on December 21st, 1979. Small grand opening ad in the photo section.