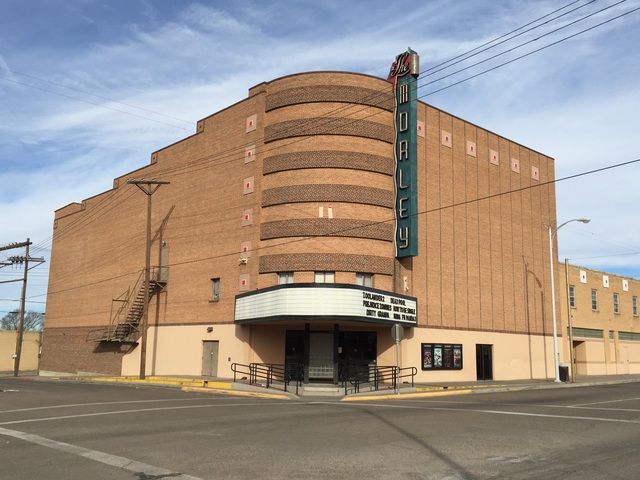 The Morley Theatre opened November 6, 1947 with Elizabeth Taylor & George Murphy in “Cynthia”. It had 1,200 seats in orchestra and balcony levels. It is a key component in the revitalization of downtown Borger, Texas. Borger is a famous Texas Panhandle oil-boom town that sprang up virtually overnight in 1926 after a massive oil strike.

The Morley Theatre came along in the late-1940’s as the town continued its efforts to change its image from lawless boomtown to a modern industrial city.

The theatre was designed by architect Jack Corgan of Dallas and was first operated by the Griffith-Consolidated Theater chain. Beginning in the 1980’s, Borger’s economy began to contract as oil industry jobs began drying up, leaving the Morley Theatre in a sad state of neglect and, at times, abandonment.

In 2002, the local economic development group invested $2 million to restore the main original auditorium with its separated balcony seating, and add four more screens in an adjacent building in order to bring first-run movies back to this town of 15,000. It was taken over by the Mitchell Theatres chain in May 2017.

FYI John Bennett … the name of the other drive-in in Borger was the Plains drive-in. We never were allowed to go there because they usually showed the “bad” movies. I finally went to see Woodstock there while I was a student at FPC. Sadly, they closed not too long after that.
John Raney – thank you for the walk down memory lane. I remember all the things that you wrote about … and I still have my Sheena, Queen of the Jungle, card. The Morley did have a free-standing ticket booth out in front (my friend Alicia worked there) and they also had a cry room. I sat in there one time just to see what it was like.

I lived in Borger until about 1963. The summer movie program was set up as I recall based on what park you lived near. We’d line up outside and the line would be around the block. The cost as I recall it was 10 cents. Our group was seated up in the balcony on the right side. Segregation was still in effect, at least a de facto sort, and I recall the black kids sat on our left in the balcony and we whites on the right or down on the main floor. The screen seemed huge and down at the bottom of the auditorium. I remember feeling a bit of “altitude sickness” being up so high. I had the same feeling when I was at the San Francisco Opera a couple of years ago while seated in the upper balcony.

One film which still haunts my memory from those Saturday mornings was a western in which the bad guys buried a woman in the sand and then left her there for the ants to take care of. She seemed to be naked. I often wondered if anyone screened these films before hand to be sure they were suitable for a young impressionable audience.
I still find it difficult to be around sand for too long of time.

One other memory: I left Borger about the age of 13. I returned 15 years later passing through on a trip. I took my two young sons to the theater. By then it was two screens – one upstairs in the balcony and one downstairs.

The thing that amaized me was that the theater had strunk in size over the years – it was much smaller than I remember.

The November 15, 1947, issue of Boxoffice Magazine said that the Morley Theatre had been dedicated on November 6. The article said that the new house had 1210 seats, but also gave the figures of 798 on the main floor, 512 in the balcony, which would add up to 1310. It’s anybody’s guess which figure was a typo. The article also mentioned that there were two crying rooms with seven seats each.

Guests at the opening included the theater’s architect, Jack Corgan, and its decorator, R. F. Churchill, both of Dallas. The first show kicked off with a half hour live performance by “Singin' Sam” Harrison, followed by the feature film, “Cynthia.”

Nice photos of THE MORLEY,too bad the vertical sigh is gone.

1982 Marquee what a title.Clint EASTWOOD in"Honkeytonk Man" and the other movie “KISS ME GOODBYE” that is the extact quote many EASTWOOD fans said during the first twenty minutes of “HONKEYTONK Man”. That was our Holiday picture and “Uncle” Clint let us down.Me especially.

The missing vertical sign was replaced at some time. It appears in this photo, which was probably 2007, judging from the movies on the marquee.

Morley Theatre was purchased by Mitchell Theatres in May of 2017. Minor clean up and repairs were done initially but full renovation is scheduled for the fall of 2017.