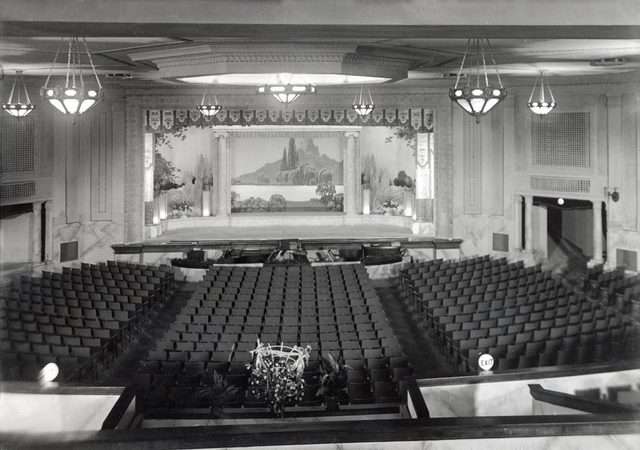 The Riviera Theater never got closer to that sun-drenched shore of the northern Mediterranean than someone’s imagination, so just why so romantic a name was chosen for this theater on Milwaukee’s then heavily Polish south side is not known.

It is known, however, that theater names were often chosen for their pleasurable associations, even if the theater bespoke nothing of such locale.

Such was just the case for this 87 foot wide by 120 foot deep structure on Lincoln Avenue at 10th Street. This brown brick building trimmed in white glazed terra cotta in American eagle motifs with two stores to share the frontage flanking the theater’s entry, had nothing of the feel of the romantic Mediterranean, but more the austerity found in the Arts & Crafts Movement then in its last days when the Riviera Theater opened on January 28th, 1920 at the meeting of two eras.

Most every city had a theater that marked the transition between the principal eras of movie exhibition: the Nickelodeons, those storefronts with a few chairs and a bed sheet against the back wall with their name describing the price of admission; the more expensive ‘Photoplay Parlors,’ which started to appear around 1910 and were the first purpose-built showhouses with permanent seats, better projection, and some attention to decor and sometimes the facade; and in about 1920 the Movie Palace arrived with elaborate decor, vast lobbies, and thousands of seats for much higher prices.

It was the Great Depression that ended the building of theaters, and the arrival of sound films encouraged a new design type as well. It was not until after the Second World War, however, that changing social patterns brought about yet another era in the form of the suburban multiplex and then the overbuilding of the megaplexes of today, small auditoria with little if any decor - almost taking us back to 1910.

In Milwaukee, the transition from the Photoplay Parlor to the Movie Palace was signaled by the Riviera Theater in 1920 when it brought 1,200 upholstered seats with carpeted aisles to the main floor and a balcony type unusual in Milwaukee: the “Stadium Style”.

As pointed out in the 1930 book “American Theatres of Today”, this style allowed better sight lines for a larger audience by creating a parquet-like elevated section at the rear which was accessible from the main floor without having to go out into the lobby. At the top of this was a purpose-built plaster and steel projection room, not the sheet metal booth so often seen in converted legitimate theatres of the day.

Along with the expected provisions for neighborhood vaudeville such as a fully rigged stage and orchestra pit for ten musicians, there was a permanent inner stage set that framed the 15-foot-wide picture sheet (movie screen) of the day upon the 39-foot-wide stage.

With the house curtain flown up out of sight, a small lambrequin of fringed, silver satin scallops adorned the intrados of the rectangular proscenium arch, and below this the inner stage set featured a three part mural of the mountains of the Riviera showing Lombardy poplars and willows around a small mountain lake (by the Sosman Landis Studios of Chicago).

Below this vista was a stylobate carrying the plinths of the Ionic columns flanking the drapery-closed area of the picture sheet and these columns were flanked in turn by rectangular pedestals supporting spherical lanterns. The pedestals themselves were advanced for their day, being of translucent glass with up-lights in their basses, all of this being arranged in an arc about ten feet back from the footlights and from wing to wing.

The auditorium could not be said to be of a noticeable style, but there were hints of the classic revival along with the Arts & Crafts as seen in the chandeliers. These seven fixtures took the form of up-light bowls as hexagons with a band-like side to which the suspending chains were attached and then dropped panels of frosted glass, the six of which terminated in an orb finial at the common apex. The center fixture was the largest and occupied the center of a 40-foot diameter hexagonal flat dome made by extending a complex series of moldings down two feet from the ceiling.

There were no cove lights such as was common in the movie palaces to come (although our Pabst Theater of 1895 did feature this then novel form of lighting), but all the light aside from some sconces on the walls in the form of fists holding torches, was provided by these six-sided bowls of frosted glass framed in bronze classic moldings. The Polacheck Co. of Milw. provided these as well as many lighting fixtures for theatres throughout the Mid-West. The wainscot of the auditorium was done in a faux marble finish with simple wooden frames breaking up the plain plaster wall spaces. There was a player piano, but no pipe organ as would be in the Movie Palaces to come, generally acknowledged for Milwaukee, to be the WISCONSIN in 1924.

Another feature signaling the changing era was the outer lobby provision of an island box office inside that space, but not on the sidewalk line as had been common to the earlier movie houses, and which, ironically, became popular again after the Second World War. The theory was that if it were at sidewalk line it might grab the passerby who might otherwise hesitate to open the doors to come in to buy a ticket. Carrying the hexagonal motif further was the island box office of that shape and it too was formed of the patterned terrazzo of the floor and baseboard. Aside from the usual poster frames on the walls, the only other decoration was the double box crown mold covered by two rows of dentils on the lower box, and a double row of waterleaf mold with a cyma mold fronting the extended upper box. The only known photos do not well show the ceiling fixtures and six sconces on each wall, all long ago removed. Lavatories located below this lobby were spacious and also featured terrazzo floors.

This $125,000 theater was the final and ultimate theatre design of local architect Charles Louis Lesser, who also designed such other local theatres as the: Community, Eagle, Gem, Iris, National (of 1906 and of 1911), Owl, Queen, and the Silver City Gem. Born in Germany in 1864, he immigrated here that year and was naturalized in 1914 during and after which he had a prolific career designing anything from residences, warehouses and a giant bottling plant in Washington, DC, to large pubic buildings for governments. This man knew poverty as a child, but grew to show amazing talent and prosperity at the changing of eras before his death in 1941.

Movies were not the only thing to grace the stage of the theater. In the early days the theater featured Polish language kiddie matinees. In 1939 the Riviera held Talent Nights, which were very popular with the neighborhood children. Most of the contestants were singers and dancers. Successful ones won a cash prize and went on to the next step, the stage of the Juneau Theater on Mitchell Street. Winners there went on to the final level of competition on the stage of the Riverside Theater downtown. The top winners received $25.

Even though a small two manual, five rank Wurlitzer theater pipe organ (even then costing $12,000) was later installed to compete with the newer movie palaces, it was never enough to guarantee an audience, especially after television took away most of the audience. In 1954 it was bought by a Mr. Marshall who needed a warehouse, and all the theatre equipment, even including the chandeliers, was sold off, leaving only the asbestos fire curtain to recall its earlier days. When he died in 1988 it was sold to a man who opened a pizza store in the western store front (which had been an early phonograph records store, and the eastern store had been the Riviera Sugar Bowl, a typical sweets shop that sold refreshments long before theatres installed candy stands and popcorn as their principal profit centers) and he sold it ten years later to the owner of the now century-old bicycle shop across the street: Vince Hanoski.

He had been looking for a larger warehouse/store location, and he mustered the courage to take on the expense of adapting the old theater to his needs. He removed the old fire curtain, and put new ‘chandeliers’ in position in the six original outer ring positions by using inverted bicycle frames to support HID up-lights on the frames! He repainted the auditorium and retained the moldings wherever possible, but demolished the projection room to add sales space, the same purpose the open stage now serves. He plans on adding a velodrome-like track around the auditorium walls at the balcony level, when funds permit, to allow wintertime practice by devotees. The frame of the third marquee above the new doubled glass entry doors now supports a bicycle as part of the sign logo, but at least this declining neighborhood will retain this non-declared landmark as adaptive reuse for some years to come. The scar of the removed box office may remain in the terrazzo floor, but the Riviera Theatre now sells a different kind of ‘ticket’ to another form of entertainment in a new era.

The Riviera was one of the least popular theaters on Milwaukee’s south side in the 1940s and early 50s. At that time it was a Fox Wisconsin theater and was not well maintained. The theater was often dirty, cold in the winter and had a higher admission than nearby movie houses. Admission was eighty cents the same as that charged by the nearby Modjeska, Granada and Avavlon. The Modjeska, Granada and Avalon showed more recent films straight from downtown. Often The Riviera would feature the same double bill as that playing at the nearby Juneau where the admission was thirty-five cents. The Riviera was not as comfortable as the nearby Aragon(Pix) or the Layton. The lobby was small with a cluttered feel resulting from the inclusion of a popcorm machine and candy stand. The Riviera was one of the first theaters on the near south side to close in the early 50s. For the past few years its lobby has been used as a flower shop.

That is indeed our RIVIERA not long after opening in 1920, back in the days when promotion was part of the art. The university has a number of photos of it in the Kwasniewski collection of the Urban Archives.

Another great view of the theatre from 1921, with youth gathered in front of the building.

Sorry, should have included this link.. interior shot of the theatre:

You can view many photos of this building and the theatre from this link.

It certainly is, and if one will just scroll down a little on the site’s front page, he will see photos of the RIVIERA ‘then’ and ‘now.’ How clever of you to have found this new owner’s site. Now let us hope that the former theatre can survive the neighborhood it is in.

Here is an undated photo:
http://tinyurl.com/4lud3r

Anyone know what happened to this fine instrument?

“No other make of theater organ has a finer tone, a greater volume or a wider variety of effects than the Mighty WurliTizer.”