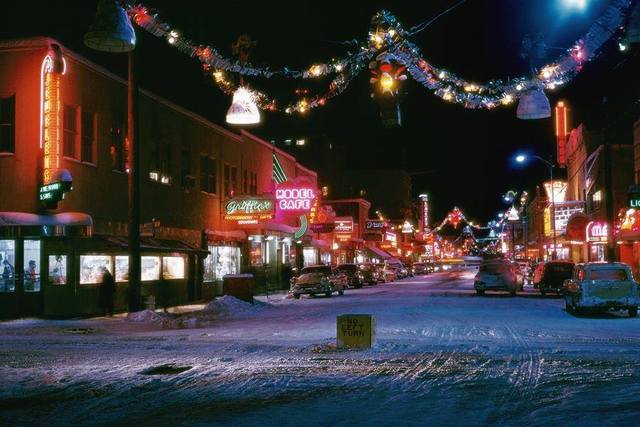 Built for “Cap” Lathrop, the 670-seat Fairbank Theatre was opened on September 8, 1921. It was the first Fairbanks structure built with concrete, which many thought would not hold up through the frigid Alaskan winters. On January 31, 1922 it was renamed Empress Theatre.

Besides movies, the Empress Theatre featured live stage shows, legitimate theatre, and concerts. In the early-1950’s, the theatre was heavily modernized by the architectural firm Calson, Eley, Grevstad with bold new décor including a large, neon-lit marquee.

In 1953, the Empress Theatre, which was a center for Fairbanks nightlife for decades, was closed.

The former theater today serves as a shopping center, called the Co-Op Plaza, with its façade restored to it’s simple 1920’s appearance, the garish 1950’s marquee is long since removed.

The Empress Theatre is just down Second Avenue from the Lacey Street Theatre, an Art Deco style gem that now houses the Fairbanks Ice Museum.

Status should be closed, I think. Here is an interior photo from 1927:
http://tinyurl.com/qt4sx

Here is a photo from the late 1940s:
http://tinyurl.com/mjzee

This article on the Empress, with photos, appeared in Boxoffice magazine on January 3, 1953:
View link

Here is an updated link to the 1953 Boxoffice article about the Empress Theatre.

Paul G. Carlson was not the original architect of the 1927 Empress. He was born in 1912, and received his degree in architecture from the University of Washington in 1935. Partners Barney Grevstad and Frederick R. Eley were about the same age.

Carlson was an associate in the office of theater architect Bjarne Moe from 1935 to 1941, and participated in the design of the Liberty Theatre at Ellensburg, Washington and the second Green Lake Theatre in Seattle, both built in 1937.

Frederick R. Eley was the son of Fred H. Eley, a prominent architect in Santa Ana, California, in the early 20th century.