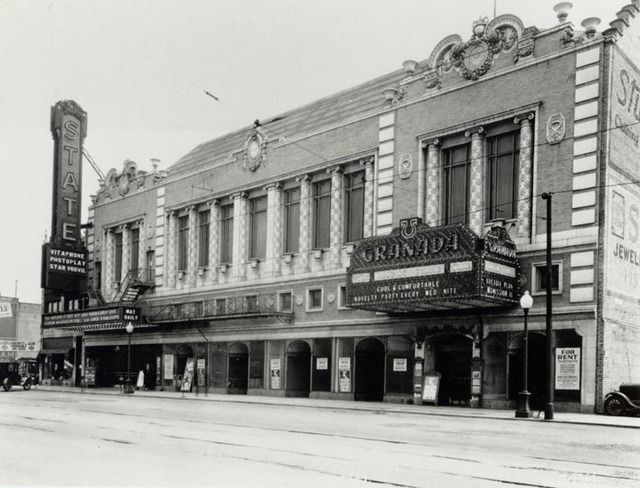 Opened on 26th August 1926 with Buster Keaton in “Battling Butler”. The State Theatre on State Street in downtown Hammond was the largest of several movie palaces in the city when it opened, and, at over 3,000 seats, one of the largest in Indiana at the time. It was built by the Karzas brothers who operated the Trianon and Aragon Balrooms in Chicago.

Lavishly appointed inside, complete with an Italian Renaissance terra-cotta facade, the State Theatre not only offered motion pictures, but live stage shows as well.

The State Building, besides housing the State Theatre, also contained the Granada Ballroom (which later became a roller skating rink), several storefronts, and office space on the upper floors.

Unfortunately, this beautiful movie house’s career would be extremely short-lived, since an bomb exploded on 8th November 1927, all but obliterating the theater auditorium, which was eventually demolished. The Granada Ballroom suffered some damage, and was closed for a while but re-opened after some time.

Retail would eventually fill up the former theater lobby space, including a supermarket, a furniture store and a laundromat. In 1943, a blaze destroyed the former Granada Ballroom and the supermarket on the ground floor below it.

In 1947, the city ordered the building’s owner to have the huge vertical marquee, several stories tall, torn down, due to its starting to become unstable.

The State Building was razed in 1967 to make way for the main Hammond Public Library building, which opened in 1968.

The bombing caught my eye. I figured gangsters or anarchists, given the date, but it seems like it may have been an insurance scam. Here’s the best info I could find.
View link

An exhaustive article by the late Gene Gladson (and Maurice O'Hern) about the STATE and this tragedy is in the issue of MARQUEE magazine of Fourth Qtr. 1988, pages 3 through 7, and while likely out of print, it is possibly in a library or available as a photocopy from the Theatre Historical Soc. www.HistoricTheatres.org . Strangely, according to their article: “The Mystery of the State Theatre,” there never was any official determination by the authorities as to the perpetrator. The newspaper accounts of the time related that the arson investigators of the day said that the damage was so extensive that it was impossible to know exactly what had caused the explosion or who set it. They tried to pin the blame on the night watchman for a while, but it quickly became apparent that the man could not have been responsible. It seems obvious to me from the data given in the article that it was definitely a job planned sometime in advance since the only high explosives in that day were dynamite or nitroglycerin, the compact —and far more powerful— plastic explosives of our day not having existed then. Neither of these could have been introduced to the finished theatre in sufficient quantity to cause such an enormous explosion without being seen, so to me it seems that they must have been placed in the plenum under the auditorium floor near the exit doors during construction. I estimate that for damage that extensive, from under a reinforced concrete floor, there would have had to have been in excess of 100 pounds of either of those then high explosives, perhaps disguised as building materials. No reference to a bombing plot was mentioned in the long article, but it does certainly seem likely. It would seem that there is no ‘official’ determination to this day, and if so, it now seems that we will likely never know for sure. The conclusion of the referred to web site article may be accurate, since only a businessman’s interests could have been served by the destruction, since the blast apparently was caused by a long duration fuse likely pushed through one of the ‘mushroom’ ventilators under the seats so that the blast would occur late at night when no one was there. I can envision someone sitting next to those side exit doors and quickly reaching under the seat to light the fuse just as the last of the patrons filed out of the auditorium. This would account for the strange odor mentioned by the night janitor, who escaped just in time.

By the way, the GRANADA theatre referred to in the previous comments said to be in the same building, was not a theatre at all, but, as brought out in the article, a Ballroom. This second floor ballroom eventually became a roller skating rink, but by 1943 insult was added to injury when a huge fire destroyed it and the supermarket below it. What remained of the large building was then demolished. The article has two large b/w photos: one of the pristine exterior, and one of the blast-damaged auditorium.

Hammond Indiana native Jean Shepherd once told the story of the destruction of the State Theatre on his WOR radio program. It’s in the Jean Shepherd archives dated 11-15-1963. It’s a good listen!

Jean Shepherd is the creator of the film Christmas Story and was a radio personality/storyteller for a few decades on WOR out of New York.

Here are the six suspects arrested for the bombing on 4/7/28:

There is a shot of the marquee being taken down in 1947 on this page:
http://tinyurl.com/yrwyvj

Decent picture here:
View link
Lots of nice pics & postcards of downtown Hammond on the rest of the site as well:
http://www.flicklives.com/Hammond/hammond.htm

This web page has several photos of the State Theatre both before and after the bombing. Most of the text is quoted from Cinema Treasures and thus offers no new information, but there are scans of a couple of newspaper items about the bombing.

Grand opening ad in the photo section. Found on Newspapers.com

Newspapers.com rescanned the page that I uploaded on July 23rd, 2017