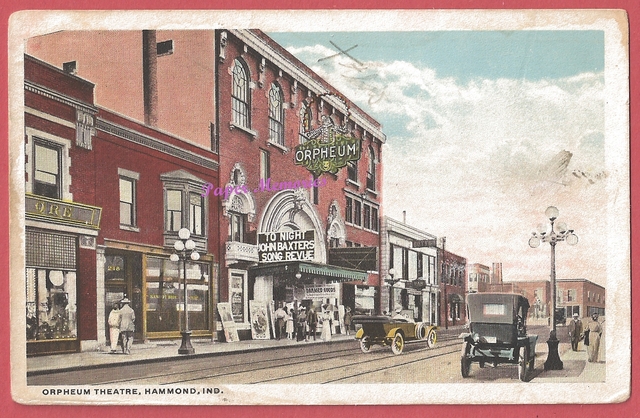 The Orpheum Theatre was one of downtown Hammond’s earliest theaters, opened in 1912, on State Street. Originally a vaudeville house, as much larger and far more spectacular theaters began to be built during the 1920’s, like the Parthenon Theatre, Paramount Theatre and State Theatre, which all hosted vaudeville acts early on as well, the Orpheum Theatre switched over to movies. By 1941 it was operated by Warner Bros. Circuit Management Corp.

The theater closed down in the early-1950’s, and has since been demolished.

Several vintage photos of the Orpheum are displayed on this web page.

Here is a pdf file of a 2002 newsletter from the Hammond Historical Society, featuring a brief article about the Orpheum. It gives the opening year as 1912, and says that the theater was designed by a local architectural firm with the unlikely name of Bump & Berry. Prior to the installation of the Kimball organ in 1922, the Orpheum sported a $10,000 Wurlitzer Hope-Jones instrument.

The Orpheum operated for only forty years before closing. The building was demolished in 1952, according to this web page about downtown Hammond architecture.

Correction: This 1952 newspaper article says that the Orpheum opened on Christmas Day, 1911.

Old Photos (see second photo on this page) show the Orpheum across the street from a rusticated stone building with the name “Long’s Hall” painted on the side. One web site (photos about halfway down this web page) mentions a dime store in that building having the address 247 E. State Street, so the Orpheum was probably at about 244, 246, or 248 E. State.

Apparently my number guess was a bit off. A timeline for the Towle Theatre that I stumbled on gives the address of the Orpheum (apparently from a 1926 directory) as 156 State Street.

I WENT TO MOVIES THERE TILL I WAS ABOUT TWELVE YEARS OLD WHICH WOULD BE ABOUT 1949. THE LAST PICTURE I SAW THERE WAS A WAR MOVIE WITH A PACIFIC THEATER SETTING. IT WAS CALLED “HIGH POCKETS”. I HAD A FRIEND NAMED “DONALD SMITH' WHO USHERED THERE. IT WAS NOT LOCATED WHERE THE ABOVE MAP SHOWS IT TO BE.
IT WAS WEST OF SOHL STREET ON STATE STREET JUST EAST OF THE RAILROAD TRACKS IN DOWNTOWN HAMMOND, JUST BEFORE YOU GOT TO HOHMAN AVENUE, AND ON THE SOUTH SIDE OF STATE.

My posting of 2/26/12 had an error the name of the movie. It was not “High Pockets”. The name was “I Was an American Spy” is a true story,and was released in 1951 based on a series of autobiographical Reader’s Digest articles written by Claire Phillips. Ann Dvorak stars as Ms. Phillips, an American nightclub singer trapped in Singapore when the Japanese march in. Having lost her husband to the Bataan death march, Phillips agrees to join an American secret agent (Gene Evans) in undermining the Japanese occupation troops. She is captured by the enemy, tortured, and sentenced to be shot, but is rescued at the last minute by her American contact. I Was an American Spy handles its more brutal scenes with a marked degree of tastefulness, thanks to the careful direction of Lesley Selander. Just as in their wartime movie appearances, Chinese actor Richard Loo and Korean actor Philip Ahn are eminently hissable as the Japanese villains. ~ Hal Erickson, Rovi