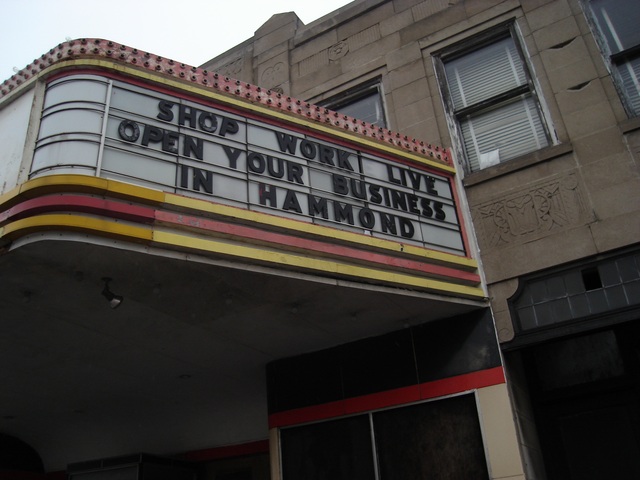 The Calumet Theatre was built in 1930, opening on December 29, 1930 with Joe Cook in “Rain or Shine”. By the early-1980’s it was operating as an adult movie theatre. I happened to notice this theatre as I was driving through Hammond. The building’s windows were boarded and there was a “For Sale” sign posted. It looked like it’s been closed for quite some time. The marquee was still there.

The Calumet Theatre was demolished in December 2011.

Jun. 1 2010 —HAMMOND — As hundreds of people gathered Thursday to celebrate the rebirth of the old federal courthouse on State Street, a much smaller group gathered inside the former Calumet Theater less than a mile away to mourn the loss of another historical structure.

Shuttered for more than a decade, the old movie house has been ravaged by time and neglect.

From the outside, the stone building with ornate etchings appears merely to need some sprucing up.

The dull red and yellow stripes along its classic marquee could use repainting. The few flashing light bulbs could use replacing.

A handwritten sign on the doors proclaims the Calumet will be reopening soon — but the inside of the building tells a much different story.

Trash lines nearly every square inch of floor space. A steady trickle of water flows from the ceiling near the projection room, and the smell of mold and mildew throughout the building is chokingly strong.

The screen, where Hollywood blockbusters flashed for generations of families, is ripped to shreds. The stage, where Miss Hammond contestants competed for years after the theater’s 1930 opening, now is filled with old bicycles and littered with debris.

“You can’t save this,” said Phil Taillon, director of planning and development for the city, whose Redevelopment Commission bought the building last year. “It’s not very difficult to have a building get to the point where it’s unfixable. This is definitely one.”

The story of the Calumet Theater’s fate mirrors that of some of downtown Hammond’s most notable buildings. Like the structures that once housed the Goldblatt Bros. Department Store, the Parthenon Theater and The Hammond Times, the Calumet’s curtain call will come courtesy of a wrecking crew.

My best friend at Lafayette and Tech was Kenny Dodd. I got into more fist fights protecting him than anyone could imagine. He was the smallest and one of the smartest people in our class. I had Mr. Hinsley, Miss Owens and Miss Fund as teachers while at Lafayette. Did you know Harry Coles his parents ran People Coal Co. which sat next to the Nickle Plate Tracks and almost in back of All Saints Church. One night while at work at the Calumet and after the box office closed, Ken came by with his girl friend. Don’t remember her name. She was the only girl he ever dated, I believe. She was fifteen and Ken was barely eighteen and they told me they were going to Kentucky to get married. I tried to talk them out of the idea, but to no avail. They had a set of twin boys, moved to the southwest for health needs of the boys and ultimately got a divorce. Ken is now in Tusan (spl) Arizona. Haven’t heard from in about a year now.

I did not know Harry Coles. Miss Owens was one of the first people who I ever knew who died. She probably was under 40 years of age. She looked a lot like my mom. I do remember attending the graduation ceremonies for my brother’s class. Kenny Dodd was at the rear of the students who marched up the aisle in the gym building. The tall students walked in front and they were two abreast side by side, except Kenny was in the back alone. I would guess he did not like that. There also was a guy in my class named Kenny Hammond who ran away at about age 14 with his girlfriend and came back a few days later. I am not sure what happened with them. Others in my class included Carol Fanno who was a great singer. I hope she made it big. Veleeta Middleton was a wonderful piano player. Mr. Brauer had the wood shop. One other place that was as famous as the Calumet Theater which is now gone was Rovais. I used to stop there in the morning on my way to Lafayette to talk with the other kids and listen to the jukebox. Private Eddie Fisher singing Anytime, Frankie Laine singing That’s My Desire and Vaughn Monroe singing Ghost Riders in the Sky. I bought many comic books and sodas at Rovais. One of the best hamburgers I have ever had from a restaurant was the Miner Dunn 30 cent big hamburger. That was when White Castles were a nickel. Their fries were also big and plentiful and tasty. Popcorn at the Calumet, I believe, was 15 cents and Cokes and candy were a nickel.

This is the obituary of my very first employer. I worked for him from December 1951 through mid May ,1955. I stared as an usher and some time in 1954 he made me his assistant. I picked up Rebecca Ann Poisal there, she worked as a candy girl. Becky ultimately became Mrs. Donald Morton. Ted taught my many things, most of which were of a positive nature. I regret that I did not stay in touch with him over the years. As young adults that type of thing does not occur important to you. Ted Myzejewski, age 93, of Hammond, IN, formerly of East Chicago, passed away Thursday, May 3, 2012. He is survived by Beverly Kaminski; Frank (Karen) Kaminski; Joe (Debbie) Kaminski; William (Linda) Kaminski; Wanda (Dominick) Romano; Catherine (David) Miller; Mary (Tom) Dodgson; and many grand and great grandchildren. He was preceded in death by his life partner, Mary Kaminski; sister, Harriet Myzejewski; and brother, Peter Myzejewski. A Mass of Christian burial will be held 11:00 a.m. on Tuesday, May 8, 2012 at St. John Bosco, Hammond, IN with Fr. Richard Orlinski officiating. Burial will be at St. John/ St. Joseph Cemetery, Hammond, IN. Visitation will be Tuesday, May 8, 2012 from 9:00-10:30 a.m. at Burns- Kish Funeral Home, 8415 Calumet Ave., Munster, IN. Ted was a WWII veteran. He was the former owner of the Calumet Theater and formerly owned banana plantations in Cuba. He retired from Inland Steel. He was a member of both St. Joseph church and St. John Bosco. In lieu of flowers, donations can be made to the Boy Scouts and St. Joseph’s Soup Kitchen in his loving memory. He will be dearly missed by his loving family. www.burnskish.com Published in The Times from May 6 to May 7, 2012

“I took my first girlfriend-date to the Ted’s Calumet Theater & went steady for a week. Thank you…” – Mike Kovacich (Hammond, IN) Burns Kish Funeral Home www.burnskish.com

I think I knew Mike Kovacich. I can’t find my 1952 Graduating Lafayette Echo right now. I am sure he was in my class with Mr. Brauer.

One of life’s lessons I learned from my first business employer, Nate Eisenhower, who owned the market across from the railroad tracks just down the street and on the other side of Calumet, was about honesty. Mr Eisenhower gave me a scale to use and some 100 pound bags of potatoes. I was in the basement of the store putting the potatoes into ten pound paper bags. He said “Put in the potatoes until the scale reads ten pounds, then… add one more potato.”

I am saddened by the loss of one of Calumet Avenues great business persons, Mr. Myzejewski, who was part of the life of all of us who grew up in Hammond in that era.

I often went to the theaters in downtown Hammond (Parthenon, Paramount) but seldom the Calumet. It always seemed somewhat seedy to me. I do remember going there to see a silly George Hamilton sci fi film called The Power. I can’t imagine why.

I used to live there around 1958 it was a church then any one have any info….. I remember the other two theaters paramountand the parthnon

This opened on December 29th, 1930. Grand opening ad in the photo section.

Martin Kovacich was in my 8th Grade graduating class at Lafayette School in Hammond in 1952. Great days.

This reopened on December 31st, 1966 after being closed since 1958. Grand opening ad in the photo section.