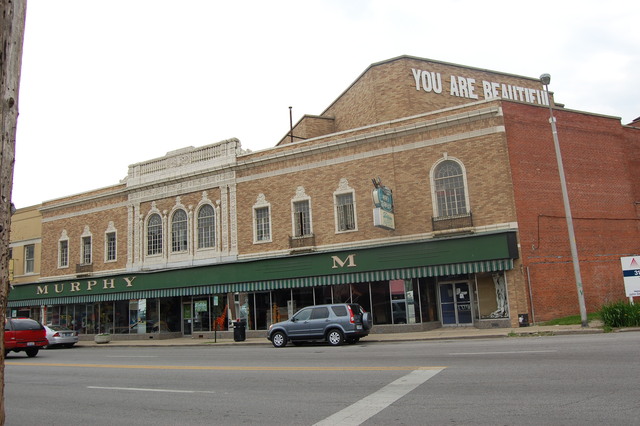 Opened on April 8, 1928, the Granada Theatre, in the heart of Indianapolis' Fountain Square neighborhood. It was built for the Universal Pictures chain.

It featured a facade of reddish-orange brick trimmed in cream-colored terra cotta in austere Neo-Classical style, with a trio of arched windows above the main entrance.

It was the first theater in Indianapolis to screen a foreign sound film, “Tierra Madre”, in 1932.

The Granada Theatre was closed as a movie house on March 11, 1951, and was taken over by the G.C. Murphy Company soon afterwards.

After the Murphy Company closed, the building sat vacant for a while before being acquired by a group of artisans in the 1990’s, who were seeking a place to set up their galleries after moving from the south side of the city.

Since then, the Murphy Art Centre, as the one-time theater is now called, has become a home for both art galleries and retail stores, a thriving example of urban reuse in a once dying area of Indianapolis.

This building is in the center of a historic area near downtown Indianapolis.

A film organization is moving into the former Granada Theater building now known as the Murphy Arts Center and will build a small screening roon within the facility: View link.