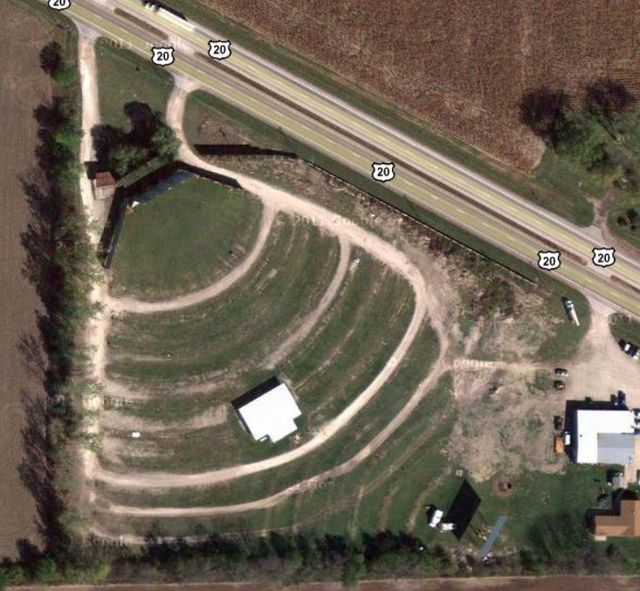 The Skyway Drive-In opened July 30, 1955, featuring the 1955 adventure “Soldier Of Fortune” with Clark Gable and Susan Haywood. The second feature of the evening was the 1953 musical/western “Redheads from Seattle” with Rhonda Fleming, Gene Barry, Agnes Moorehead and Teresa Brewer. In addition to the movies featured, color cartoons were also shown. Another opening day feature at the Skyway was the “Buckeye Valley Five” country and western band. They performed live from on top of the concession stand. Admission to the theater was $.50 for adults and children under 12 years of age were free. Wednesday nights were a bargain, one dollar per car load. It was referred to as “BUCK NIGHT.” The Skyway Drive-In opened for business only on weekends around April 1st; full operations started in May where the theater operated seven days a week until late-September or early-October. The theater reverted back to the operation on weekends only until the last weekend in October.

The Skyway Drive-In Theatre construction and operation was a family run affair. It was opened by Joseph E. Binder, Jr., and Dorothy (Rohrbacher) Binder. Joseph known as “Joey” was the eldest of a family of 17 children and Dorothy came from a family of 12 children. Joey years earlier reopened the Attica Theatre in Attica, Ohio, on April 8, 1944. Joey was employed by the Herbrand Corporation, located in Fremont, Ohio, as an electrical foreman. He also was a pilot and flew the Herbrand executives to various locations as well as transporting ice fisherman to Lake Erie. Dorothy worked in her home doing laundry and ironing for several families.

With their passion for screening movies, they decided to make plans to build a drive-in theater in 1954. They found adequate acreage on property owned by Fred and Alice Swartzman, husband and wife. On February 26, 1954, they purchased 10 acres from the Swartzman’s at a purchase price of $9,000. The property is located in Washington Township, eight miles West of Fremont and five miles east of Woodville, Ohio. Joey selected Skyway as the name for his new drive-in theatre since it reflected his love for the skies and his pilot abilities.

Joey began construction with enthusiasm. He brought in earth moving equipment, built driveways, ramps, and the concession stand. At his home in the garage, he poured large squares of concrete around poles for the speakers. The poles and the aluminum fences were made from his airplane hangar that he had disassembled. Installing underground wiring for the speakers was not a problem since Joey was an electrician. There were 150 speaker poles which accommodated 300 cars on the parking ramp. The screen tower was supplied from Selby Industries at a cost of $6,086.82. Ben Ogden of Ohio Theatre Supply Co. supplied additional equipment at a cost of $7,500. It was equipped with Strong Futura ll movie projectors. The Skyway was built at a cost of approximately $31,000 - $33,000.

The concession stand served all homemade items, but after a year or so Dorothy found easier and less time consuming ways to provide the food items. For example, she cooked chickens every morning and Joe and Carol, her son and daughter, remember how the smell of boiled chicken would awaken them. Roots Poultry located in nearby Fremont, Ohio, convinced Dorothy that she could buy the already seasoned shredded chicken. They convinced her that it was just as economical as purchasing and pulling chicken from the bone. Dorothy continued making the fresh hamburger patties, fresh perch and french fries.

In 1956, the city of Woodville, Ohio, wanted a new swimming pool, but funds were not available for the project. Joey offered his drive-in for a benefit movie show. All the proceeds went to the pool fund except the film rental cost. Joey often used the complex to support other groups. The Fremont Kart club in the early 1960’s built and operated a go-kart track at the drive-in for a few years. They held go-kart races there during the day. The Skyway often hosted area schools for an “After Prom Party.” A couple of movies of interest to high school kids were shown which made for a very long night for the Binder family. It was a fun night though especially for Joe and Carol.

In the late-1970’s the drive-in switched to auto sound and did away with the in-a-car car speakers. A second screen was needed, in order to accommodate the Spanish speaking moviegoers. A large percentage of the drive-in’s customer base was the migrant workers from Texas, Florida, and Mexico. After deciding to accommodate the Spanish crowd, Joey made plans to make a twin out of the Skyway Drive-In. He got some estimates on a second smaller screen tower. After looking at the estimates he decided to build his own. A screen tower was built in Joe’s work shop in pieces and was erected in August of 1982. An addition was constructed on the back side of the concession stand to house the movie projectors for the second screen.

Business began declining in the 1980’s and the drive-in was operating on weekends only. Like all other drive-in theatres during that time period, VCR’s, cable television, multiplex indoor theatres, changing car culture, showing R and X rated movies and the loss of interest of families going to drive-in theatres attributed to the loss of business. The percentages of the box office revenue that the film companies were requiring theatres to pay increased also increased during this time frame. This was a large factor in the decision to cease operation at the Skyway Drive-In along with the higher costs associated with electricity to operate the projectors.

Therefore, in 1986, the decision was made to cease the operation of the Skyway Drive-In. It was a very difficult decision to make for Joey and Dorothy. After being closed in 1986, it was suggested that a flea market would be a profitable endeavor for the drive-in. After much deliberation, they decided to try it. They advertised and opened it up to vendors with free set-ups for the first year. It is now a flea market with vendors and customers each Sunday morning from sunrise to early afternoon from May through October. Since that time the Skyway Drive-In still stands with one screen tower. Unfortunately the Selby screen tower got blown down during a storm on July 10, 2013. The concession stand is still standing and being used for the flea market refreshments.

Joey and Dorothy were getting up in years and in 1999 their daughter, Carol took over the responsibility of operating the flea market for them. Joey passed away on April 22, 2010, at 91 years of age and Dorothy passed away on June 3, 2012, just 12 days short of her 89th birthday. Today the Skyway Drive-In Theatre flea market is owned and operated by both Carol A. McCowan and Joe Binder III.

This is the correct address for the Skyway. For some reason Goggle maps does not map to the correct location. It does map correctly using Bing’s maps.

Thanks Randy for the outstanding presentation of the Skyway Drive-In Theater, which is so dear to my heart. The article was great and I actually had forgotten some of the history, i.e Go-Karts for one. Thanks again for for your patience and for the time you spent putting together the pictures and information.