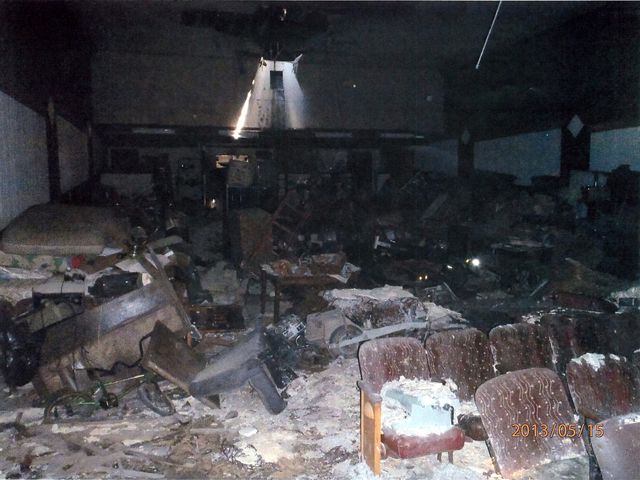 The Limelite Theatre opened on November 15, 1939, with a capacity crowd and featuring the 1939 musical “Under Pup” with Gloria Jean, Robert Cummings and Nan Grey. The theatre when it first opened was known as ‘Limelite of Wonderland’ because Woodville, OH is the ‘Lime Center of the World’. It was opened by Paul Pontius who also owned the Sylvan Theatre in Sylvania, OH. It seated 450 patrons and had a cry room for mothers with small children. The inside décor featured the names and colors of the area athletic teams. The Limelite Theatre was open seven nights a week and offered Saturday & Sunday matinees. They hosted an annual event at Christmas for the public to enjoy each year. Doris Hoesman, a volunteer with the Woodville Historical Society recalls “We couldn’t wait for it to open. We would come home from school and run over to see how it was coming along”. Pontius retired in 1951 from operating the theatres. He died on October 24, 1979.

George Wakely bought the theatre in 1951. He began offering Spanish-language films twice a week in mid-to late 1953, to appeal to the area’s migrant workers. In 1953, the Limelite Theatre movie advertisement noted ‘Mexican Pictures’ will be shown on Tuesday and Wednesday, with regular films the balance of the week.

Al Tolento would take over the operation of the theatre and later on Marciano Guerrero, Jr. took over. He started offering more Spanish films. Eventually only Spanish films were shown at the theatre. The Limelite Theatre had its last screenings in the 1980’s. Several businesses have occupied space inside the theatre over the years, including Fern’s Beauty Shoppe, The Beaute Mirror, Nationwide Insurance, Spotlite Soda Grill and the Woodville News. The last business in the old theatre was occupied by David Bessman as a used furniture store and the Temple of Light Ministries church. Records in the Sandusky County Auditors office indicate the property was sold to the Temple of Light Ministries for $37,000 in July 1975. Bessman passed away inside the theatre.

Over the years the theatre building was not well maintained. The roof started to leak and later-on caved in, destroying the inside of the theatre. The village of Woodville took over the Limelite Theatre because of non-payment of taxes. After completing the acquisition of the building and property, village officials have begun discussing plans for the site, including constructing a walk-way between E. Main Street and a village owned parking area that sits behind the building. The Limelite Theater was demolished in 2013.

Here is a photo:
http://tinyurl.com/n5mk6

Here is another photo:
http://tinyurl.com/ybo2p5p

The Limelite is gone for good!!! It has been demolished finally!!

my name is alfred tolento. i presently am living in lake wales, florida. I purchased the limelite theatre in woodville, ohio in 1968 from george & beema wakely. my family and i operated it until 1978 showing only spanish movies. we are saddened by its demolishment