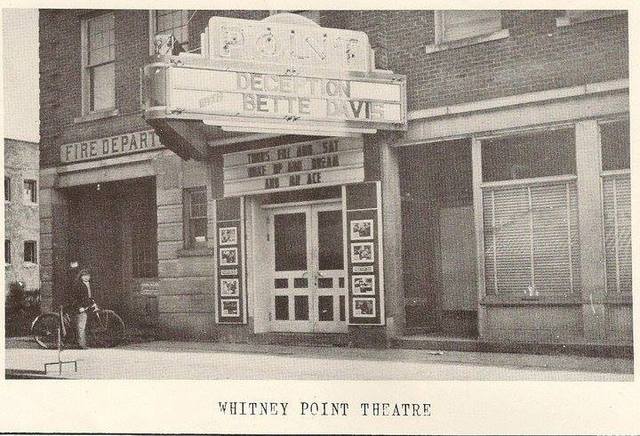 Flyers on eBay dated mid-1930’s advertise for the “Whitney Point Theatre”; articles in the Binghamton Press confirm that the theatre, now known as the Point Theatre, was in existence through 1955. It closed no later than 1961. Cinema Tour website states the theatre was located on Main Street and suggests that the building is still standing. If so, it is well hidden; all the remaining buildings appear too old or too new. A local had suggested long ago the theatre was located in the vacant lot adjacent to the old Reporter building, but old postcards suggest this isn’t true either.

More information on this theatre would be welcome.

I don’t follow you; as I said above, the information about the opera houses was not derived from advertisements, and they were very specifically about opera houses in WHITNEY POINT. As I said before, all the sources are posted above in comments and you can check them yourself. I’m not sure about how the Peoples' Theater factors in but I know it well — because I posted a page for it some time ago. What I couldn’t find was the newspaper article about the opening, so I was glad to see you did and could add to the information. Nice job! But there was definitely an opera house in Whitney Point (actually, two, or three, depending on how you count…plus apparently opera houses in Lisle and Center Lisle as well)…and it most likely became the Point Theater.

Incidentally, my dad used to run the paper in Whitney Point, I grew up in Greene, and I made a study of old theaters when I was a kid…so I do know the area pretty well. :)

I have a local history group for Whitney Point on Facebook and have been getting first hand information from life long “Pointers”. The closing date you posted for The Point has already been corrected by them and we are waiting on the daughter of the last owner to bring information on whom he bought the theater from. We have close to 600 members and I would say more than half are 70 years old, plus.

It was one of those senior citizens who gave me the above photo of the theater no one else could find, and identified the original building for us. They also supplied the information about the new fire station building being erected on the same lot. I would say they have been pretty spot on so far.

Sigh The 1961 closing date was a possibly inaccurate memory from 30 years ago. I said as much, above. That said, I am pretty sure the recollection of the 1967 closing date (the date of the fire) is not correct. The reasons are that the Binghamton Press article about the building burning down does not mention a theater at all, and I am clear that when I did the research in ‘78, the Greene theater, which closed in late spring '67, was the last small town theater around. Having said that, all the rest of the stuff I have posted is easily confirmed by searching online. It is from primary sources; a gazeteer from the era, the Whitney Point Reporter special edition from after the fire, and the Binghamton Press database which you have already found (which also has listings for the other area papers, which also has information about the theaters in Whitney Point. I did multiple searches on the internet to gather this information. Meaning no disrespect to your research team, but none of them were alive (or at least past infancy) during the period in question, pre-1931 or so. Do the same searches I did, and you’ll find the same information. I think you have done a great job solving the mystery, but all the information I have posted above is easily verifiable. I recommend you check it all out, because you’ve done a terrific job completing the picture on this theater and the People’s Theater. If you are in the area, the Whitney Point Reporter archives should be searchable on microfilm in the local library. All the definitive answers lie there. Good luck!

A good starting point would be to search the specific search string “Whitney Point Opera House” into the database of old Binghamton Press issues that you found on the Fulton Postcards site. That should assure you that such an opera house did, indeed, exist (and as Joe and I have suggested, was very probably the same hall that later housed the Point Theater).

People have memories of attending the theater right up until the building burned down. Also, the lack of recolection about an opera house is based on the fact that most businesses were owned by locals and in Whitney Point almost every original family still has decendents living in the area. If a family had owned an opera house that knowledge would have been passed down in generations, regardless of the age of the family member at the time of the venue operating.

As Joe said, it would be a great thing for somebody (who doesn’t live in California as I do), to head over to the library and go through the old microfilms of the Reporter, as I did in the ‘70s when I first researched this. Perhaps my recollection from that time that it closed prior to 1967 is mistaken. The one thing I can say with certainty is that the Press articles in '67 about the building burning down make no mention of the theater.

Regardless, there’s simply no question that the Whitney Point Opera House existed (a simple search of the Binghamton Press archives will confirm this), and that given they both were in the municipal building, that it and the Point Theater (and probably the Crescent, and perhaps the Peoples') were one and the same. No controversy. Peace.

A while back an E-bay seller offered a postcard that was an invitation to the Whitney Point High School Alumni Banquet, held at the Opera House on June 23, 1905. I don’t know when the building that later housed the Point Theatre was built, but if it was the same one that was there in 1905 then, to accommodate banquets, the Opera House must have been one of those multi-purpose halls with a flat floor. It might later have been remodeled with a raked floor when it became a full-time movie house.