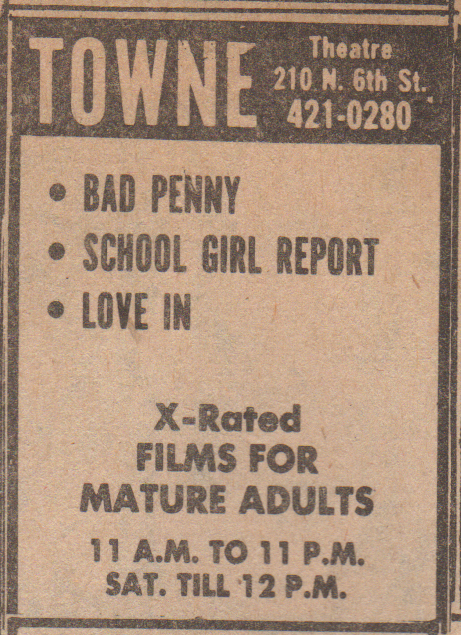 This small, ornate building at 210 N. 6th Street was built in 1896 as Caesar’s Café. Designed by Charles K. Ramsey, the structure provided lunch for St. Louisans for two decades before becoming the Ritz Theatre for a few years. It became the Royal Theatre in 1915 when a beautiful new façade was added and other improvements were made. These changes would make the theatre a landmark in St. Louis and famous in the Midwest for its architecture.

In August 1922 the Royal Theatre’s lease was purchased by the Universal Pictures chain, and they closed the theatre to carry out a $25,000 upgrade. It reopened as the Rivoli Theatre on November 19, 1922 and was operated by Universal Pictures until September 1926.

Designed by architect Charles K. Ramsey in the Louis Sullivan tradition, five panels with sgraffito on them were placed vertically along the upper front above the marquee, and a panel bearing the name ‘Rivoli’ stood horizontally above the marquee. These panels made the theatre a distinctive building.

Sgraffito is a process unique to twentieth-crentury St. Louis. ‘Sgrafitto’ means scratched, but that’s not actually how the process works. Two forms of colored plaster are placed over each other; the colors usually contrast. The upper layer is cut into a pattern so that the bottom layer shows through.

The Rivoli’s sgrafitto had intricate patterns cut by skilled craftsmen. When the building was torn down, salvagers saved the sgrafitto panels first.

Despite pleas from the theatre’s owners to save this historic building which had been granted Landmark status, the theatre was razed in 1983 to make way for the Metropolitan Square building.

Photo at this link:
http://www.builtstlouis.net/opos/frames.html

direct link to photo that I posted above.

Here is TC’s photo as his link has failed:
http://www.builtstlouis.net/opos/townetheater.html

Condensing the name changes over the years:

An article in The Moving Picture World of January 1, 1916, said that the St. Louis Amusement Company had opened the Ritz theater at 208-210 N. 6th Street as an all-picture house on December 11, 1915. The Ritz operated from eleven o'clock each morning until eleven o'clock at night, with the admission price being ten cents at all times.

Here is an item from the May 27, 1916, issue of The Moving Picture World about the new owner of the Ritz Theatre and his plans for the house. The house had reopened as the Royal on May 7.

“CORNELIUS BUYS THE RITZ. Theater on Sixth and Olive Will be Called the Royal.

“St. Louis, Mo.—J. W. Cornelius, proprietor and manager of the two Lyric theaters and the Lyric Skydome, has added another theater to his string of amusement houses. The Ritz, on Sixth near Olive street, has just passed into the Cornelius management, and opened on Sunday, May 7. The name of the theater has been changed to Royal, and will be known as the downtown home of Paramount pictures, with the price of admission ten and twenty cents.

“The house, which is practically new, has been closed for the past two weeks, undergoing a general brightening up with paint and decorations, and some attractive hangings. One of the finest orchestras in the city, composed of seven pieces with harp and organ accompaniment furnishes the music for the entertainment. The same brand of efficiency prevails at the Royal that has made the Lyric theaters noted for the high quality of their programs, and the excellent deportment of the attendants.

“All the houses under the Cornelius management run with a smoothness and watchful care of detail that speaks for a high degree of study and thought on the business on operating a theater. Mr. Cornelius was one of the first exhibitors in St. Louis to put on high class films In his theaters, and to cater to the better class of patrons. All his houses enjoy a regular clientele of patrons who go to see each bill as it is put on, and the downtown Lyric, which changes program every day, has perhaps the greatest number of these regular patrons.”