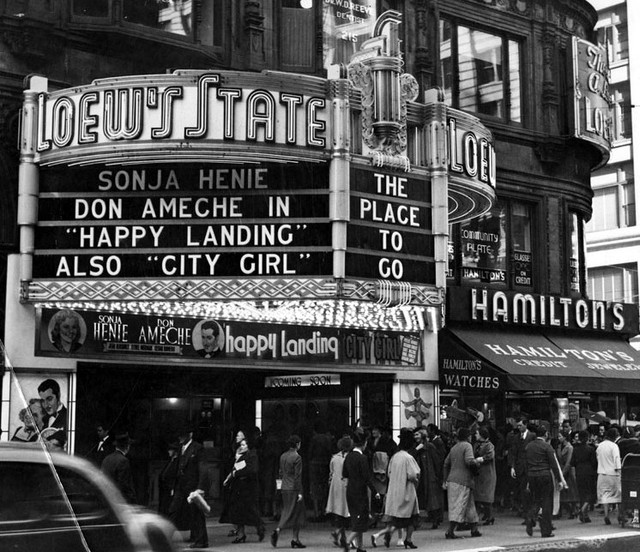 The Loew’s State Theatre was opened November 12, 1921 with vaudeville and “A Trip to Paradise” starring Bert Lytell. It was equipped with a Moeller 3 Manual/18 Ranks theatre organ. The theatre had two entrances, one on S. Broadway, the other on W. 8th Street and the theatre is surrounded by a 12 storeys high office building (the largest brick-clad building in Los Angeles). Inside the auditorium the decorative style combines Classical, Medieval and traditional Spanish styles. Three outstanding features are a lavish ceiling decorated in a Spanish Rococo style, a seated Buddha occupying a niche above the proscenium arch and the splendid futuristic painting on the asbestos safety curtain which depicts a composition of orange and gold planets and comets floating around onion-domed towers on a brilliant blue background.

Loew’s Inc. only operated the State Theatre until 1924, when it was taken over by Fox West Coast Theatres, who took out a 25 years lease on the building and it became the State Theatre. They removed the Moeller organ and replaced it with a Wurlitzer 3 Manual/6 Ranks organ in 1925. In 1928 an act low on the vaudeville bill was the ‘Meglan Kiddie Revue’, which introduced a 6 years old Francis Gumm to the stage in her debut performance (Of course everyone knows she became Judy Garland). Fanchon and Marco stage shows were an early feature of the programs and they featured early performances by a chorus line which included future stars Janet Gaynor and Myrna Loy.

By 1941 the State Theatre was operated by United Artists Theatres Circuit, and by 1963 it was operated by Metropolitan Theatres when it became the first S. Broadway movie palace to convert to screening general release movies dubbed into Spanish. The Wurlitzer organ quietly ‘disappeared’ sometime in the 1970’s when the organ at the Los Angeles Theatre vanished too!

During the 1990’s the State Theatre was used for location shoots, where Bette Midler’s version of “Gypsy” had a scene filmed here. Also the Tina Turner based biopic “What’s Love Got To Do With It” and for “Wild Bill” when it stood in for a 5 second shot as an 1885 New York theatre. For this one shot alone the film production crew re-painted the auditorium and re-draped the proscenium with red velvet swags, fringes and tassels which remain today. The State Theatre closed as a movie theatre in 1997.

In 1998 it was taken over (on a lease) by the Brazilian based ‘church’ Universal Church of the Kingdom of God(UCKG) when they moved out of their previous home at the Million Dollar Theatre.

Currently, this theatre is one of four theatres owned by the Broadway Theatre Group, which was formed in 2007 to manage, restore and preserve the Historic Theatres of Broadway. As of early-2016, they manage the Tower Theatre, Los Angeles Theatre Palace Theatre and State Theatre. They have done significant restoration as well as new lighting and electrical systems in all four theatres. The restoration is ongoing. The Tower Theatre, Palace Theatre and Los Angeles Theatre are currently rented out for performing arts, live music, film shoots and private events (and occasional movies at the Palace Theatre and Los Angeles Theatre) while the State Theatre was leased to the Cathedral of Faith church. The church vacated the theatre in December 2017 and the owners were looking for a new occupant. Surprisingly, the Cathedral of Faith church moved back into the theatre in June 2021.

The State Theatre is designated a Historic-Cultural Monument.

Thanks for your answer, Don. I keep seeing an interstitial on Turner Classics that several times a year the downtown L.A. movie palaces open their doors to the public and show vintage movies.

Yes. Mainly that’s the Los Angeles Conservancy’s big fundraising event, Last Remaining Seats. Starting on the last Wednesday in May, we show six classic movies, usually in the downtown theaters, but sometimes branch out to other parts of LA.

By the way, my understanding is that the State has a drop-down ceiling over the stage which precludes lowering the screen or closing the curtains. So even if the church was receptive to the idea of allowing movie fans in, it wouldn’t be practical…

An article about the State Theatre in the December 3, 1921, issue of Exhibitor’s Trade Review had this interesting information about the movie screen in the new house:

“The new Loew State Theatre which opened in Los Angeles Nov. 12 has a screen 24 by 44 feet. It is twice the size of any other screen in use in that city and pictures are furnished for it by what is said to be the largest projection booth in the world. It will be interesting to note how the public takes to this mammoth picture sheet.”

The theatre is owned by the Broadway Theatre Group which also owns the Los Angeles, Tower and Palace Theatres.

The theatre is still rented by the Cathedral of Faith and is not currently available for other bookings or film shoots. But the webpage has a couple nice interior photos and it looks like it has recently been repainted in a nice, more colorful color scheme.

I have been inside the state theatre. The Lobby is grand, and the auditorium is lush and big, beautiful and Hollywood worthy. Hopefully the Church will move out (a la the Ritz on Hollywood Blvd) and this precious gem may have another chance at movie-dome.

so far as I know, there is not a new theater tenant, but this is a wonderful new blogged article with photos https://www.avoidingregret.com/2018/08/photo-essay-catedral-de-la-fe-flips.html