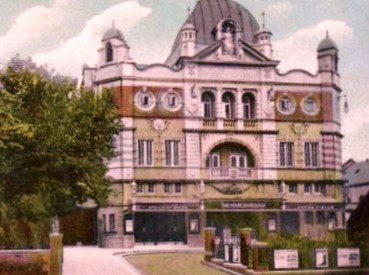 Located in the north London district of Holloway. This magnificent theatre was designed by prolific theatre architect Frank Matcham. It opened on 5th October 1903 with a week of opera by the Carl Rosa Opera Company. Operated and built for theatre owner Frederick William Purcell, initially it thrived as a major suburban theatre presenting plays and musical comedies.

From 28th May 1918 it became a full time cinema, known as the Marlborough Picture Theatre and became part of the Provincial Cinematograph Theatres(PCT) circuit in 1925. A Thomas Jones, 2Manual straight organ was installed to accompany the silent films. PCT were taken over by Gaumont British Theatres in February 1929. Gaumont closed the Marlborough Picture Theatre in September 1940, due to wartime conditions. It was taken over by Odeon Theatres Ltd. in February 1942 and they re-opened it on 9th March 1942. Seating capacity as a cinema was reduced to 1,685 seats, set in Edwardian splendour.

The Marlborough Theatre was an early casualty in a spate of mass closures by the Rank Organisation who operated the huge Gaumont Holloway nearby, and also two other huge theaters not too far away in Finsbury Park (Astoria and Gaumont).

The Marlborough Picture Theatre closed on 31st August 1957 with Stanley Baker in “Hell Drivers” and Earl Cameron in “The Heart Within. The empty building was used as a location for a scene in the 1958 film "Gideon’s Day”(Gideon of Scotland Yard) which starred Jack Hawkins and was directed by John Ford. The scene featured the entrance way of the Marlborough Picture Theatre and the rear stalls during a film performance.

The Marlborough Theatre was demolished in 1962, to be replaced by a non-descript glass and concrete office block tower named ‘The Marlborough Building’ which in 2008 is in use by City & Islington College.