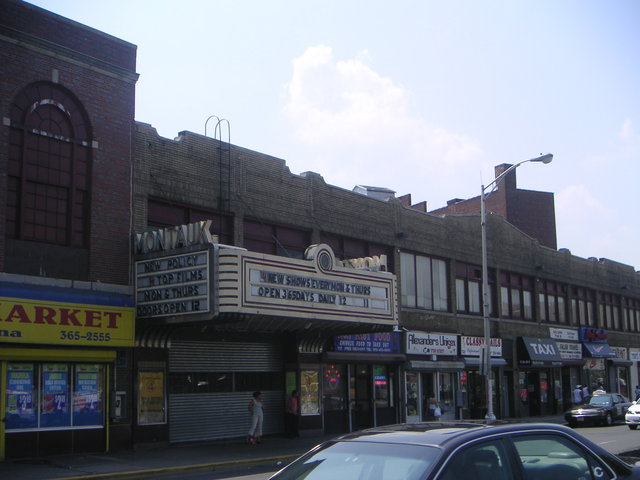 Located on Main Avenue in Passaic, the New Montauk Theatre opened on January 30, 1924 with Mary Pickford in “Rosita”. There was a full orchestra, and George Emmans from Washington DC was at the console of the $50,000 organ. It was operated by the Fabian Theatres chain.

Later operated by Warner Theatres and Stanley-Warner. It had a great Art Deco style marquee. It was closed as a regular movie theatre in 1974. It soon reopened as an Independently operated adult theatre which remained in the building for almost 30 years. The Montauk Theatre was closed suddenly and without notice in May 2005.

This once proud theatre was in good condition, but sat empty and unused for several years awaiting its fate. Taken over by the city of Passaic, the theatre along with several other buildings on the block were demolished in May 2011, supposedly for new public school to be built on the site. In 2016 it is still a vacant lot! In June 2018 the new public school was partially built with the remainder of the site fronting Main Avenue used as a construction site.

I took these pix yesterday … I don’t know how far this demolition is going but clearly the theater is gone … maybe the Hotel will be saved? Who knows? Well, I hope you enjoy these pictures … I did not know that a Droid camera was this good!

The city demanded the theater be torn down?

Something VERY shady about that!

Isnt there always something shady in these deals???

Here’s a blog post and some photographs taken during the demolition.

I decided to swing by the Montauk this morning while the crew was there. I met a worker at the entrance gate and had an interesting conversation.

He told me that everything of value (light fixtures, marble, stained glass, etc) was taken by “The State” before demolition began. The crew working now has salvage rights to anything left in the building and that’s why they’re stripping anything and everything that can be sold. I asked who I should contact about buying a light fixture. He said to call the governors office.

I then asked what was to happen to the name on the marquee. He said that somebody already asked about that and anything of value would be removed before getting destroyed.

Here’s where it gets weird. I showed him the article about the organ and he said it was against the back wall on the stage! He said they ripped anything of value out of it and the rest got smashed when the back wall was demolished.

The piano in the pit was still there too and that was pounded to rubble when the roof came down.

At one point, he said all the chandeliers were removed and then later said they were all smashed when the roof went down.

I wonder which story is accurate?

So, now that the theatre and flea-bag hotel are gone, I’m sure the neighborhood is a much safer and pleasant place to be for the junkies, dealers, gang-bangers and school children of Passaic. What these pathetic small-minded city officials should have done was restore the theatre as a performing arts center and bulldoze the rest of the town.

My mom and dad had their wedding reception in the Ritz Ballroom in 1935, and I remember going to the Montauk for the Saturday kids matinees in the 50’s & 60’s.

An older cousin said he attended science fiction double features at the Montauk. Was he pulling my leg?

Starting in the mid-1950’s, science-fiction double features were popular at all of the Passaic theaters. In fact, they were popular all over the country.